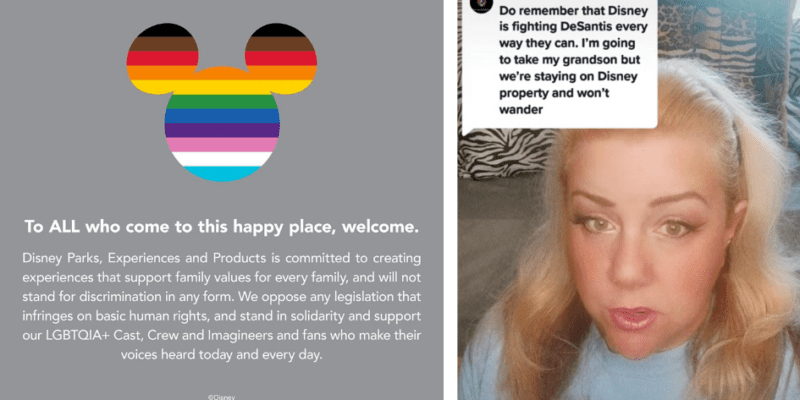 The Walt Disney Company found itself embroiled in controversy earlier this year after Florida Governor Ron DeSantis introduced the Parental Rights in Education Act, also known as the “Don’t Say Gay” bill. Fans and Cast Members led protests around the country after public records showed that The Walt Disney Company had donated to every politician who sponsored the bill.

Disney released a statement on March 3 but didn’t directly mention the “Don’t Say Gay” bill, which was later passed into law. Fans again asked Disney CEO Bob Chapek to condemn the anti-LGBTQIA+ legislation, and Pixar staff wrote The Walt Disney Company a letter asking the company to take a stronger stance against the bill.

DeSantis reportedly warned Disney not to get involved in the “Don’t Say Gay” controversy. He made good on his threats when he introduced legislation to dissolve Disney’s Reedy Creek Improvement District. The bill later passed, and Walt Disney World Resort will not be in control of its own municipal services as of next year. Other conservative Republican politicians like Senator Josh Hawley and Senator Ted Cruz publicly attacked Disney for its stance on the law and gay representation in Pixar’s Lightyear (2022).

Some members of the LGBTQIA+ community came together on TikTok this week to discuss Florida’s oppressive laws, including “Don’t Say Gay,” public school book bans, and bans on gender-affirming care for transgender and non-binary people. Some Disney fans explained that they struggled morally with visiting Walt Disney World Resort and giving tax/tourism money to Florida.

@beththrifts posted the video that spurred the discussion:

Beth explains that Disney has always been more gay-friendly than other employers in Florida. In the 1990s, before the Supreme Court legalized gay marriage nationwide, The Walt Disney Company offered gay and lesbian employees insurance for their partners.

“They are fighting against Ron DeSantis. We also used to go to what was called ‘Gay Days…’ Everybody would wear a red shirt, and you were free to hold your partner’s hand in public, to show affection in public in the Park, without worrying that somebody was going to scream or like p*ss themselves,” Beth says.

Gay Days is an unofficial fan meetup at Walt Disney World Resort and have been going on since the 1990s. Beth says the only downside of the event was “evangelical Christian” protestors “screaming totally hateful things” outside the Disney Parks:

“They also successfully petitioned for Disney to put a sign out warning families that there was going to be gay people in the Park, I guess being openly gay. I don’t know what these homophobic families thought that they think their kid was going to see gay people and magically become gay or want to be gay. That’s not how it works. You’re born the way you’re born. In fact, allowing kids to see gay couples and know that it’s very normal, love is very normal, is the best thing you can do for your children, so they don’t grow up to be homophobic idiots.”

A 2000 article from The Ledger confirms Beth’s story. Though it doesn’t name a specific year, the report notes that Disney posted a sign warning Guests of “a gathering of homosexuals in the Magic Kingdom.” As recent as 2013, a right-wing action group flew a banner over Walt Disney World Resort warning Guests about “Gay Days.”

In the comments, LGBTQIA+ Disney fans and allies agreed with Beth. “We are moving forward with the trip-and we had a thoughtful conversation about how Florida treats their citizens,” @userallitok said after watching Beth’s video. Previously, the same fan wrote, “I just told my kid we could go to Walt Disney World and I think I have to cancel. I cannot support this state.”

“Do remember that Disney is fighting DeSantis every way they can. I’m going to take my grandson but we’re staying on Disney property and won’t wander,” @flowerchildannie explained.