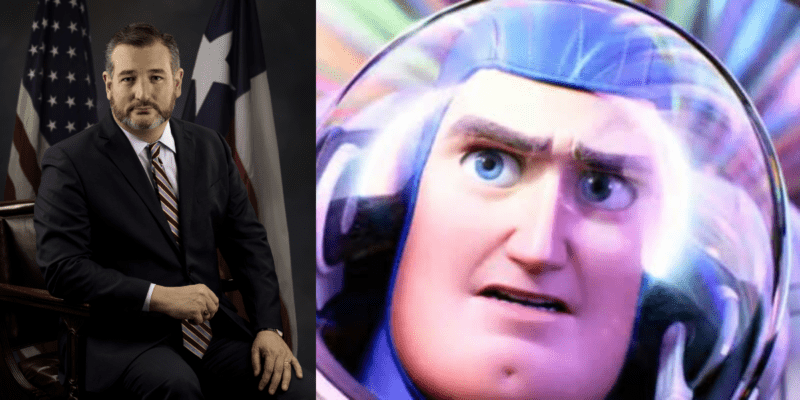 Notably, the film features the first-ever on-screen same-sex kiss in a Disney or Pixar film. This comes at a tumultuous time for The Walt Disney Company after they allegedly removed a gay scene from Pixar’s Turning Red (2022) and fumbled their initial response to Florida Governor Ron DeSantis’s “Don’t Say Gay” law.

The scene was initially removed from Lightyear, but Disney reversed course and vowed to keep the scene. 14 East Asian and Middle Eastern countries banned Lightyear after Disney refused to censor the kiss for international markets.

Lightyear’s domestic release hasn’t escaped controversy. A movie theater in Oklahoma went viral for posting a sign warning parents about the lesbian kiss and promising to fast-forward through the scene, though they later reversed their decision.

Chris Evans, the new voice of Buzz Lightyear, has vocally expressed support for the same-sex kiss, saying it should be “the norm.” In a later interview, Evans said that homophobic critics are “idiots” and will “die off like dinosaurs.”

This week, Republican Senator from Texas Ted Cruz, a vocal critic of The Walt Disney Company following the “Don’t Say Gay” controversy, spoke out against Lightyear on his podcast, The Verdict.

Cruz touted the famous catchphrase, “woke Disney,” and accused The Walt Disney Company of promoting “lesbian toys.” He also mentioned that Lightyear might be banned in China, though the country hasn’t released an official statement about the film. (China has banned depicting homosexual relationships in movies and television.)

“I gotta say, it’s a wild twist when Hollywood has been willing to grovel to China and let China censor its movies, to embrace anti-Americanism, to avoid any criticism of China because they want to get access to the Chinese movie market, but when it comes to their culture agenda, apparently now they’ve suddenly discovered, ‘Alright, give up the money because lesbian toys are more important,’” Cruz said.

“Now, never mind that the last time I checked, most toys are kinda androgynous — they’re usually without genitalia,” he continued.

Cruz refers to toys, but it’s important to note that Lightyear doesn’t feature any toy characters. Though the film is based on the Toy Story universe, the depicted characters are human.

Have you seen Lightyear? What did you think?