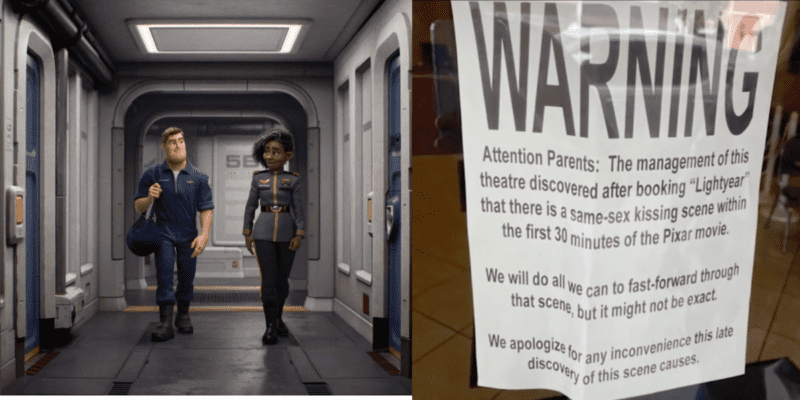 After public backlash, a movie theater in Oklahoma reversed course on a controversial decision this week.

The 89’er Theater in Kingfisher, Oklahoma, posted a sign last week about the premiere of Pixar’s newest film, Lightyear, directed by Angus MacLane.

The film has garnered public attention after a same-sex kiss was removed and re-added to the film amid conflict between The Walt Disney Company and Florida Governor Ron DeSantis for his “Don’t Say Gay” law.

Attention Parents: The management of this theatre discovered after booking “Lightyear” that there is a same-sex kissing scene within the first 30 minutes of the Pixar movie.

We will do all that we can to fast-forward through that scene, but it might not be exact.

We apologize for any inconvenience this late discovery of this scene causes.

The owner told ABC KOCO News 5 that the theater removed the sign and never fast-forwarded through the same-sex kiss in Lightyear.

Chris Evans, Lightyear’s star, expressed frustration that the kiss between two women was controversial, saying it should be “the norm.”

Evans later called homophobic critics of Lightyear “idiots” who will “die off like dinosaurs.”

Theaters in 14 Middle Eastern and East Asian countries have refused to show the film because Disney denied requests to censor the same-sex kiss.

Lightyear premiered in theaters on June 17 to mixed reviews and a $51 million opening weekend at the box office. From Disney:

What do you think of the same-sex kiss in Lightyear? Let us know in the comments.