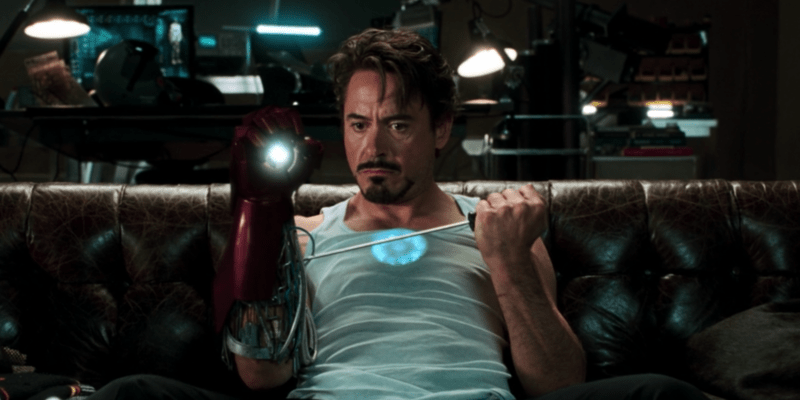 Synonymous with the Marvel Cinematic Universe himself, Robert Downey Jr.’s Tony Stark has retained his popularity in Kevin Feige’s franchise ever since he first appeared, and launched the MCU, in Jon Favreau’s Iron Man (2008).

After his death at the end of the Infinity Saga, the MCU altered course with new anchors like Benedict Cumberbatch’s Doctor Strange and Elizabeth Olsen’s Scarlet Witch. Looking ahead, though, and after the character’s revival in the Marvel canon series, What If…?, Iron Man will again grace screens in 2022 — this time played by General Hospital and Full House star, John Stamos.

Downey Jr.’s most commercial role to date is his decade-long performance as arrogant billionaire, and owner of Stark Industries, Tony Stark AKA the red and gold-armored Iron Man in the MCU. From starring in his own trilogy, the Avengers movies, and appearances in films like Captain America: Civil War (2016) and Spider-Man: Homecoming (2017) — the latter saw him become the pseudo-mentor to Tom Holland’s burgeoning hero, Peter Parker/Spider-Man –, Downey Jr. was an essential part of Marvel Phase One through Phase Three, and his death in Avengers: Endgame (2019) would go down as one of the most upsetting moments in cinematic history.

While not canon like What If…?, the animated show Spidey & His Amazing Friends still draws on the existing Marvel Comics catalog of stories, and presents a child-centric story with characters familiar to fans of the Marvel Universe. As it heads into its second season, with a third announced, Spidey & His Amazing Friends will welcome Iron Man to the series which already features characters like Miles Morales and Gwen Stacy, as well as the most well-known Spider-Man incarnation, Peter Parker. John Stamos will voice Iron Man when the character makes his debut.

Speaking to ScreenRant, Stamos revealed the challenges of reinventing a character so well-known to the fandom, and one that is intrinsically linked to Downey Jr.:

“I kind of came in thinking, “I’ll do something like Robert.” And they’re like, “Don’t do that. Don’t do that.” It was interesting, because they’re all kids! I’m coming in as a mentor, for sure, but also kind of the adult character. So, it took me a minute, but I think I found my version.

I wanted him to be acerbic like he is; I wanted him to be the smartest guy in the room. And we get that across. I don’t know how much they used, but I throw in a lot of nicknames and stuff like that. Sometimes I’ll do stuff, and they’re like, “John, remember this is for three-year-olds, four-year-olds.” Nothing dirty, but just maybe something a little more sophisticated.”

The Big Shot actor also queried whether his version of Iron Man was Iron Man enough:

“They have these voice directors that are so great, like Kelly Ward. I said, “Kelly, what are we doing? It doesn’t feel like Iron Man.” But he said, “This is you. This is your Iron Man. You don’t have to do a lot, because it’s in the character and in the legacy.” And I wanted to be respectful, for sure. I asked the Marvel guys there, “Am I in the right world?” and they said, “Yeah, it’s perfect for this.” It’s a different version.”

Different versions of characters are seemingly the norm in the current MCU, so Stamos’s worries here should be tempered by the knowledge that the Multiverse exists and fans are now used to encountering multiple versions of characters they have come to know across the years. Unfortunately, not the rumored Tom Cruise Iron Man fans expected in Doctor Strange in the Multiverse of Madness (2022).

That said, it will be interesting to see another take on the classic comic book character, and with Stamos being such a popular and household name, it could pave the way for a new fan-favorite incarnation of Iron Man.

Will you be tuning into Spidey & His Friends? Let us know in the comments down below!