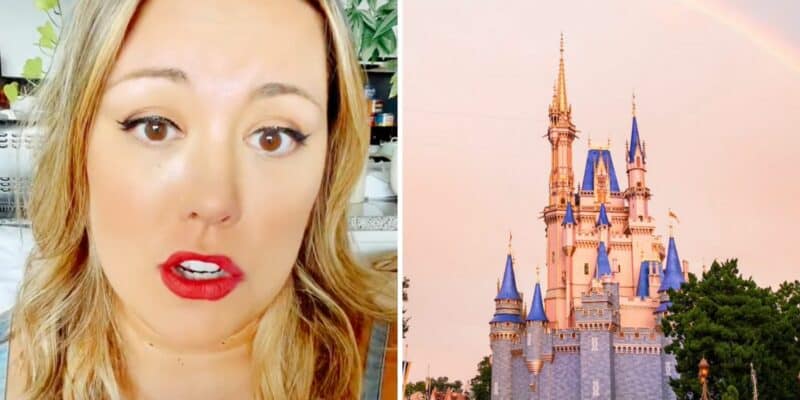 The Disney content creator community is growing every day.

These self proclaimed Disney adults fill their days documenting special events on social media for those missing the parks, sharing their favorite Disney bounds, dishing honest reviews on resorts and attractions, or divulging their best tips and tricks for thousands, sometimes millions of followers.

For many the visibility is welcomed, forging new friendships and sometimes even leading to partnerships that allow them to monetize their love for all things Disney.

For some, however, being publicly recognized can prove to be a security issue.

TikToker @drunkdistory recently learned first hand the importance of discretion when content creating for the 35 thousand Disney fans who follow her page.

She shared her “cautionary tale” in a recent video:

In the clip, the TikToker elaborates on a time when she “didn’t put herself in the safest situation” in sharing trip specifics with the internet.

I started doing videos on here in May of last year, and had a trip planned for September. I was so excited to be on [TikTok] talking about Disney with everyone and I couldn’t wait to share details of my trip. I saw a bunch of my other creator friends doing the same. A lot of people asked me ‘where are you going? where are you staying?’ Those are my favorite questions in my day to day life, I wish people wanted to hear about my Disney trips but they don’t. So I went on lives. I said where I was staying, when I was staying there.

She admitted that sharing the details of her trip so publicly and in real time was naive and scary in hindsight, claiming that an incident that took place on the final day of her Disney vacation was an eye opener.

I spent my very last day at EPCOT at the Mexico pavilion drinking margaritas. It was time for me to leave and so I got on the skyliner and headed back to where I was staying, which was Carribean Beach. So I picked up my luggage and I headed towards the lobby. I walked in there, and a gentleman started waving and saying ‘drunkdistory! drunkdistory!’ And then proceeded to say that he’d been waiting in the lobby of that hotel for three hours to meet me. Luckily, I was literally headed to get my Uber. And it was during the pandemic, so it was totally fine to tell someone you wanted to be six feet away from them, which I did. I said I have to go, my Uber is here.

She shared that in reality, this individual situation was likely harmless. But it did make her face the harsh truth that as a single woman traveling alone, she needs to be more careful.

The moral of this cautionary tale is ‘don’t share the details of you trip online.’ 99.9% of the people are just excited and want to hear what your plans are. but you never know who’s watching. Disney is a safe place, but it’s not creep proof. Especially if you are a solo traveler, it is not safe to do that.

The response to the video was respectful and appreciative. Some shared that the reminder was helpful for them as fellow solo travellers. Others asked how to best handle a content creator sighting in the future as to not make them uncomfortabe.

Overall, the two minute clip served as a good reminder for all social media users, not just those visiting the Disney Parks, to exercise caution in their posts.

Do you think influencers are putting themselves at risk on social media? Tell us in the comments.