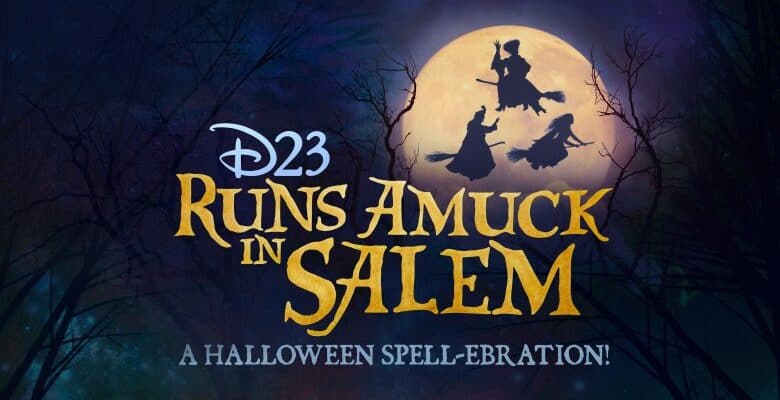 Lock up your children! The Sanderson Sisters are returning for an exclusive Hocus Pocus-inspired event, perfect for kicking off the Halloween “spell-ebrations.”

With the upcoming release of the highly anticipated Hocus Pocus (1993) sequel, fans are eager to see the Sanderson Sisters running amuck once again. Hocus Pocus 2 is coming to Disney+ on September 30. With the premiere of this Halloween must-see, Disney recently announced an exclusive event filled with spooktacular fun in the company of Winifred, Sarah, and Mary Sanderson.

Related: “Lock Up Your Children!” the First Trailer For Hocus Pocus 2 Is Here!

D23 invites its Members to the bewitching town of Salem, Massachusetts, to celebrate the return of the Sanderson Sisters with a spooktacular day-long event, immersing themselves in a chilling experience in the town where the magic all began. “D23 Runs Amuck in Salem! – A Halloween Spell-ebration” will take place on October 1 and will offer D23 Members the chance to participate in an exclusive Hocus Pocus 2 screening and the “Black Flame Ball costume party.”

Upon check-in, guests will receive a commemorative map of the town, highlighting many of the film’s original locations for you to visit, along with some of Salem’s most cherished town landmarks and witchy wonders. This will be your guide to historic and legendary Salem, open for your exploration during this delightfully wicked season. During your self-guided tour of Salem, you’ll soar over to a hometown movie house, where D23 will host an exclusive screening of Hocus Pocus 2!

The evening will conclude in grand style by relighting the candle at The Black Flame Ball, held at the historic Hamilton Hall. At this fantastical Halloween costume party, members are encouraged to channel their inner Sanderson Sister, “Dad-ula,” or pointy pop icon to dance away the night with live music, food, libations, and entertainment that could only be summoned once every 300 years! Look out for a few surprises that are sure to put a spell on you, as this ultimate Halloween party is the perfect way to kick off the spookiest season with plenty of treats—and a few tricks!

Ready your broomsticks, mops, and vacuums because the Sandersons are back, witches, and they’re on the hunt for the best way to ring in the spookiest season of all. Come stay for a spell and join us for D23 Runs Amuck in Salem! – A Halloween Spell-ebration.

Tickets for this exclusive event are $250 per person (plus a $7 processing fee) and will go on sale tomorrow, August 3, at 10 am PT/1 pm ET through the D23 website. You can click here for more information on tickets for “D23 Runs Amuck in Salem! – A Halloween Spell-ebration.”

The event includes the following amenities:

And as an additional — and complimentary! — experience, the City of Salem and Creative Collective will host an outdoor Hocus Pocus 2 screening at the Salem Common on October 2, 2022. Salem Common is the very same park where Allison and Max walked to school in Hocus Pocus! Guests interested in joining this fun screening of Hocus Pocus 2 are invited to bring blankets, pillows, and hoodies — since it is an outdoor venue and seating is not provided — and even their own picnic to enjoy some snacks after forming a calming circle.

The official Disney+ synopsis of this movie reads:

You can watch Hocus Pocus on Disney’s streaming service, Disney+. The synopsis of the popular Halloween film reads:

If you have not yet signed up for Disney’s streaming service, you can subscribe here.