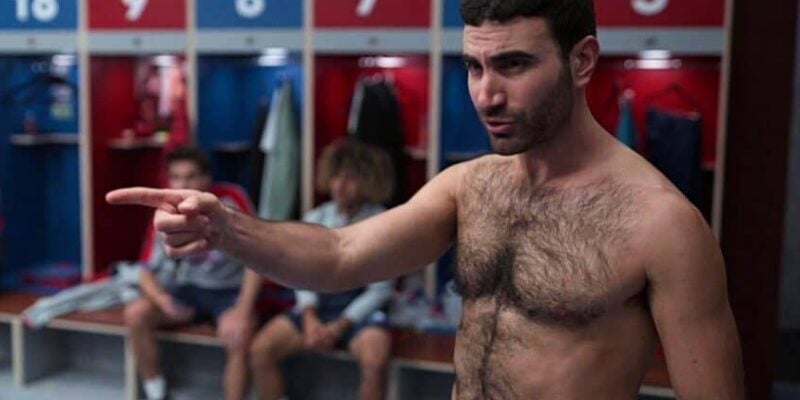 The actor for Marvel Cinematic Universe’s Hercules, Brett Goldstein, has come forward to speak on his surprise Marvel Studios casting — and the abysmally short time he was given to bulk up to “Marvel superhero” standards.

As we all probably know by now, the Thor: Love and Thunder (2022) post-credits scene featured Russell Crowe’s Zeus plotting revenge against Thor Odinson (Chris Hemsworth) with his son, the Greek god Hercules.

In a surprising cameo appearance, British actor Brett Goldstein of Ted Lasso (2020) fame appeared on the big screen to much shock and fanfare, as Marvel fans and audiences alike were treated to their first glimpse of a future Marvel Cinematic Universe “hero”.

Goldstein is known for playing the “skinny” and lean veteran football player Roy Kent, starring alongside Jason Sudeikis’ character, Ted Lasso. Goldstein is a comedian who also wrote on the show, and recently received the Primetime Emmy Award for Outstanding Supporting Actor in a Comedy Series. Right before he was set to appear as a cameo on Thor: Love and Thunder, it seems Marvel expected him to work some serious muscle-building magic.

Speaking to The Playlist, Brett Goldstein said that his stint in the Thor post-credits was the doing of Marvel Studios President, Kevin Feige — director Taika Waititi didn’t even know who his character was:

No, I didn’t know what it was for. I was told that some Marvel people would like to have a Zoom with you, and I met with them, and it was just so surreal because…it was literally out of the blue one night, and I was very busy, and it was like, ‘Can you make time for a Zoom?’ ‘Yes, sure.’ And they go on Zoom, and they just told me what you see in the film, which is the sort of opened with, ‘So Russell Crowe is Zeus,’ and I’m like, ‘Yeah, OK, go on.’ And blah, blah, blah. And then they turn around, and they reveal, ‘It’s Hercules; it’s you.’ And I went, ‘What?’ Just like, ‘Are you serious? Are you f**king with me? Is this a wind-up?’ So yeah, it was as surprising to me as I think it has been to other people.

Goldstein recalled speaking to Taika Waititi about his casting, saying that he was “basically like a skinny comedian” and that regardless, he pledged to “do his best” in the two weeks that he was given:

I said, ‘You know I’m basically like a skinny comedian?’ I said, ‘When is this filming?’ It was like in two weeks, and I was like, ‘I mean, I’ll do my best, but two weeks feels …’

Clearly, Goldstein was nervous about getting filmed as Marvel Hercules, as he asks if his character has to be “as big as Thor”, whom he is clearly being set up to go against. He also cites that he was doing “400 pushups” that day, claiming that he was “fit to explode”:

Goldstein continues on the subject, saying he’s “surprised and delighted” with the response to his character, though admitting that his lifestyle has to change, now — he plans to “eat 30 chickens a day from now on”:

It would be a real bummer if people weren’t interested. Of course, I care. I have to say I was surprised and delighted, as in it seemed to get a real positive response. And that, it’s amazing. I just, I’m not in charge of what they’re doing or what they want to do. And in a way, that was an experience that I hadn’t had for a long time, where I had no involvement in the behind-the-scenes of it. Look, you’re in f**king good hands. They make really good shit. You know what I mean? And Taika Waititi’s fucking brilliant, so it was like, ‘I’m in the best hands possible.’ But, it’s amazing. Who knows if anything will come of it, who knows, but it was a fun thing to do, and I’m pleased that people seem to have enjoyed it… I’m going to eat 30 chickens a day from now on; it will be fine.

Goldstein definitely seems excited and ready to take on the new challenge (and phase in his acting career) if his statement of “it will be fine” is anything to go by.

Being a formidable-looking enough foe opposite Chris Hemsworth’s massive Thor is a very, very tall order — and it begs the question, if Marvel Studios’ aesthetic standards, at such short notice, have become truly too much. Even Natalie Portman had to bulk up significantly to take on the role of Mighty Thor/Jane Foster.

However, Goldstein has a bit of time from now until his next MCU Hercules appearance — so he’d best get used to the taste of chicken breast.

Do you think the fitness demands of Marvel Studios films is necessary? Share your thoughts in the comments below!