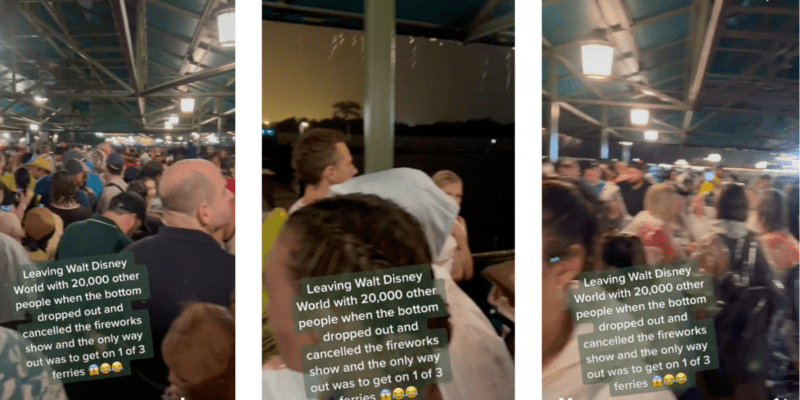 One of our reporters at Magic Kingdom said the storm on Monday lasted nearly three hours. Though rain is an everyday occurrence in swampy Central Florida, such a long and persistent thunderstorm is unexpected. She shared this video of Guests running for shelter on Main Street, U.S.A.:

@700ceo on TikTok shared another perspective from the thunderstorm. Guests tried to leave Magic Kingdom for the night, but the monorail was down due to inclement weather, and many buses were suspended. This left thousands of Guests waiting for one of three Ferry Boats operating on the Seven Seas Lagoon:

The video shows thousands of Guests packed under an awning to avoid the rain. Thankfully, while it may take a while for Walt Disney World Water Transportation to arrive, the boats have a high capacity and can take on more Guests than the average Disney bus or Monorail car.

No one was injured during the severe thunderstorms at Walt Disney World Resort this week.

Related: Disney Park Boat Starts to Sink, Guests Left in Water For Over an Hour

Turn your travel into a treat on our fleet of boats that’s an attraction in itself.

Take in the scenery and relax with welcome breezes as you sail around Seven Seas Lagoon and Bay Lake. Feel the wind in your hair and the magic in the air as you cruise Crescent Lake and Lake Hollywood. Water taxis and ferries sail to and from Magic Kingdom park. Most routes run on 15- to 30-minute intervals.

Have you ever taken the ferry boat or water taxi at the Disney Parks?