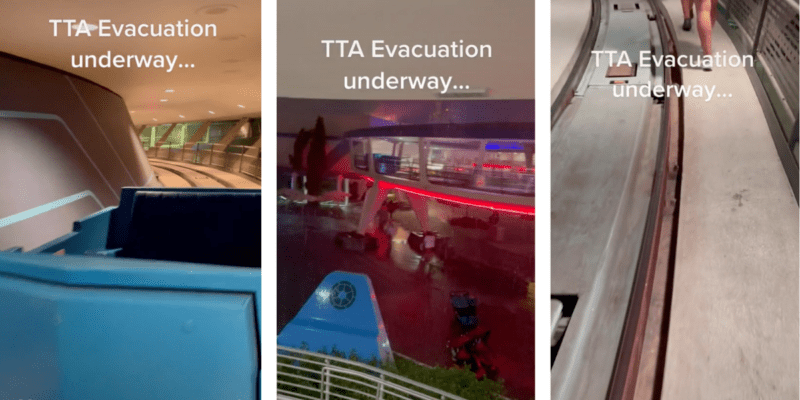 Earlier today, we reported a severe thunderstorm at Walt Disney World Resort last night that led to flooding at EPCOT. Dozens of Guests at the Disney Parks shared videos of themselves sheltering from the rain.

Some Guests found themselves in an unlucky position when the rain started – on board the Tomorrowland Transit Authority PeopleMover at Magic Kingdom. Because this ride is partially outdoors, it shuts down when inclement weather is in the area.

Sometimes Cast Members will allow Guests onboard the Tomorrowland Transit Authority PeopleMover and other outdoor Disney Park attractions to finish their ride before closing the attraction. Still, if a storm is imminent, an evacuation is necessary. @mainstreetmagic1971 was one of many Guests evacuated from the Tomorrowland Transit Authority PeopleMover last night:

“It’s so dangerous in a storm,” a Disney Parks fan replied. “I love evacuations 😁,” another said.

Thankfully, it appears all Guests were evacuated safely to wait out the thunderstorm. One of our reporters shared this footage from Magic Kingdom last night:

The Tomorrowland Transit Authority PeopleMover is a slow-moving, all-ages tour of Tomorrowland at Magic Kingdom. Disneyland Resort was the first Disney Park to have a PeopleMover, but the ride closed at Disneyland Park in 1995. From Disney:

Have you ever been evacuated from a ride at Magic Kingdom, EPCOT, Disney’s Hollywood Studios, or Disney’s Animal Kingdom?