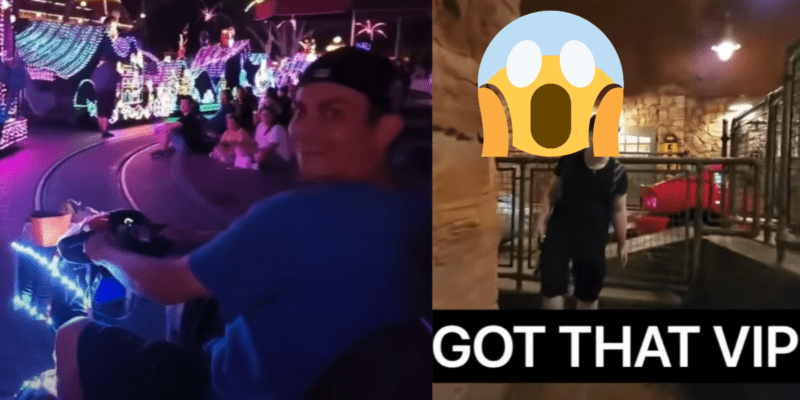 While many so-called Disney Influencers bring the magic of the Disney Parks to the rest of us at home, others have found themselves with lifetime bans for breaking Disney Park rules. In June, two Disneyland Resort influencers were hit with a petition to ban them from the Disney Parks after allegedly admitting to going to the Parks while sick. They later showed negative COVID-19 tests.

Now, another Disneyland Resort YouTuber is facing backlash for a live stream at Disneyland Park on Sunday night. Tony Paredes runs the Beautiful Tomorrow TV YouTube channel with 21.8k subscribers and a linked Patreon. He visited Disneyland Resort with friends and family and live-streamed for just over four hours during his trip:

One of the members of Paredes’s party, Jennifer, rented an electric convenience vehicle (ECV) or scooter to help navigate Disneyland with a knee injury, according to a comment made by Beautiful Tomorrow TV. Paredes borrows the scooter during the stream and takes Jennifer’s son on Radiator Springs Racers in Cars Land at Disney California Adventure.

This moment infuriated many Disney Parks fans, one of whom made the following video which has quickly garnered thousands of views and comments calling for live streaming to be banned at Disneyland Resort:

The video shows Paredes riding the ECV through the Radiator Springs Racers line, scanning the child’s parents’ disability access pass – the father, Sam, and injured mother, Jennifer, do not ride with them. The child says, “We got that VIP,” to which Paredes laughs.

A fan comments and asks Paredes if he’s riding the ECV because he’s injured. “I’m okay,” he responds. “I’m just borrowing this scooter so we can get on. VIP. We’re VIPing it tonight. We’re a little spoiled… I want you guys to say lots of thank you’s to Jennifer and Sam in the chat.”

Throughout the live stream, Paredes solicits donations to his YouTube channel, Patreon, and baby registry, further infuriating Disney Parks fans as soliciting and commercial advertising is against the Disneyland Resort Park Rules.

“They should be blacklisted. So disgusting,” one commenter wrote. “I truly hope Disney will do something about this!” another said.

Many Guests who use Disney’s Disability Access Service (DAS) were upset at it allegedly being exploited: “I’m lost for words as someone who deals with legal blindness, and get anxiety when I use services like this makes me upset to see someone using it just laughing,” one Disneyland fan wrote.

“To call it VIP is disgusting!! I have a few medical conditions which I qualify for DAS. I’m almost completely paralyzed from my waist down. I would do anything to be of normal walking body like Tony,” Emvogue 79 said. “I would gladly use the standby lanes if it meant I didn’t have my disability. It’s definitely not VIP it’s needed or I wouldn’t be able to enjoy or even go to Disney.”

On Twitter, many fans asked for Disneyland Resort to take action not just towards Paredes but all live streaming at the Disney Parks:

Please @Disneyland. @DisneyParks do something about the live streamers ruining your park. They aren’t respectful of other paying guests, treat the park as if they own it, are begging for money while on property, and just last night filmed themselves abusing the DAS pass system.

Please @Disneyland @DisneyParks do something about the live streamers ruining your park. They aren’t respectful of other paying guests, treat the park as if they own it, are begging for money while on property, and just last night filmed themselves abusing the DAS pass system.

Disneyland had a Vlogger faking disabilities on scooters, using the DAS, while live streaming on youtube asking for money, this weekend. BUT Magic Key holders coming in after work for a meal, couple drinks and a few rides are the Unfavorable ones.

Disneyland had a Vlogger faking disabilities on scooters, using the DAS, while live streaming on youtube asking for money, this weekend. BUT Magic Key holders coming in after work for a meal, couple drinks and a few rides are the Unfavorable ones.

Paredes released the following statement after the incident claiming that the family’s DAS pass was actually for the child that went with him on the ride and not his mother, Jennifer:

Unfortunately there is a video that has taken everything out of this stream completely out of context. Let me clear some things up that we weren’t trying to make public on the live stream to anyone.

Jennifer’s son Josh who is shown in this video is a minor and he is the one that has the DOS pass not Jennifer. That family supports me a lot and Josh is a sweet kid and asked if I would go on rides with him which we did on and off camera.

Jennifer had knee surgery a couple years ago she has problems walking and she rents a scooter to get around the parks. We legitimately went to a booth with a Plaid CM and they invited me to join them for the weekend they were in town. We came up with this idea to put lights on her scooter for our live stream and follow the parade down Main Street and make people happy. Which we did! We got lots of compliments

Here’s my mistake and I’m owning up to it. I’m very sorry for using the term V.I.P. honestly I said it because at the time the way her family was treating me and the way the DOS enters queue is totally different than what im used to. Josh is actually the one in the video and says it to me. He loves Disneyland and how the DOS makes him feel special as he should he deserves it he’s special needs. Disneyland is known for treating people with Special needs very well. I’m so embarrassed and im sorry right now for her family getting involved into all of this.

You’re more than welcome to attack me make fun of me whatever to me all I ask is leave them out of it. Jennifer also requested if you can blur their faces out of your video we would appreciate it. We aren’t going to youtube we are not reporting you. We are asking nicely and respectfully.

I’m sorry to everyone that I took advantage of DOS because a close friend asked me. I’ll be hosting a charity live stream soon and all proceeds with go towards a charity for people in wheel chairs with special needs.

If you live stream at Disneyland or Walt Disney World Resort, please be respectful of other Guests.

We also want to make it clear that not all disabilities are visible.

Do you think live streaming should be allowed at the Disney Parks?