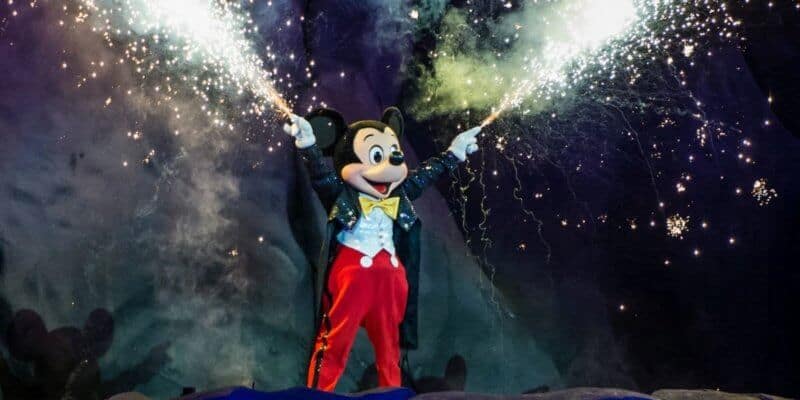 Nighttime spectaculars at Disneyland have plenty of magic to fill Guests with joy. However, during a recent Fantasmic performance, a surprise visitor made Guests quickly get on their feet and start screaming and cheering.

With so much to see and do at Disneyland Resort, Guests are sure to have a day filled with magic from the moment they cross the gates into the Happiest Place on Earth. The chance to meet and hug their favorite Disney character, explore Disneyland Park and Disney California Adventure, enjoy timeless classic attractions and immersive new experiences, be mesmerized with world-class entertainment, and relish mouth-watering dining offerings, among so many other things, make a visit to Disneyland an absolute dream to many.

As if that wasn’t enough, Disneyland and Disney California Adventure have the most magical nighttime entertainment offerings to provide the perfect ending to your day of adventures in the Parks. With music and scenes from beloved Disney films, popular characters, and amazing special effects, including fireworks, projections, water and fire effects, and more, it’s not hard for Guests to want to get on their feet and enjoy the show.

However, before a recent performance of Fantasmic at Disneyland, Guests quickly got on their feet and started screaming for an unexpected appearance at the Park.

Redditor u/GrannysGlewGun posted about the incident as follows:

I broke my toe two days before my Disney trip so I was in an electric scooter for 2 days. (Seems cool when you’ve been standing all day but mostly it sucks).

Anyway, I was waiting for Fantasmic to begin and they have a system where every able-bodied person has to sit on the ground so the folks in scooters and wheelchairs can sit in the back and still see the show. While we were waiting, one girl jumps up and started screaming at her friend to “get up get up get UP”!! And one by one people jumped up and started screaming “cockroach”! Finally after about 50 people jumped off the ground, one guy stepped on the roach and the crowd erupted in cheers! He held his fists to the sky in victory- happiness was restored.

Fellow Redditor u/_kashew_12 commented, “Who knew a cockroach would make a bunch of people’s day!” And while this unexpected visitor shocked and surely grossed several Guests out, hearing about the incident and how it brought so much joy to the Guests present is hilarious.

Since Disneyland Resort reopened, Guests have pointed out that their overall experience at the Parks is not quite the same as it used to be. Guests have recently shared reports of overflowing trash cans, queues full of litter, and more at both parks. This is without mentioning the breakdowns and evacuations that appear more frequent each time at several Disneyland attractions. These problems have extended to different critters spotted at the Park, including cockroaches, spiders, and even rats.

Daring heroes and epic villains do battle on a grand scale in an incredible nighttime show—starring Mickey Mouse.

Have you experienced Fantasmic! at Disneyland Resort? Let us know in the comments below!