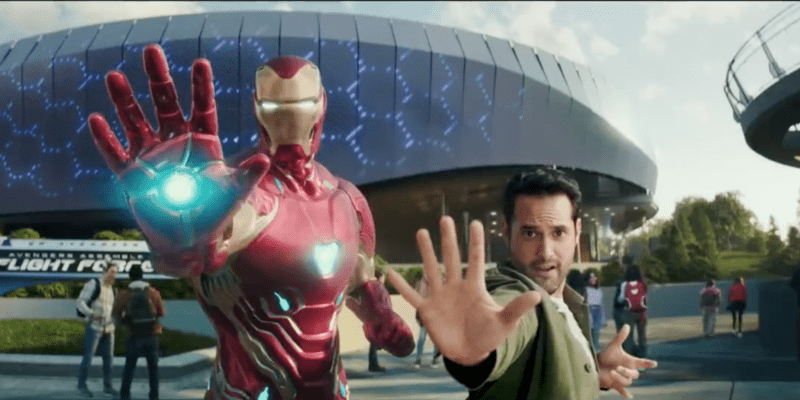 Avengers Campus is currently running preview events at Walt Disney Studios Park in Disneyland Paris. While many are beyond thrilled to experience this highly immersive expansion, some are unimpressed by the Park’s latest project.

One of the most anticipated aspects of Avengers Campus is the opening of Avengers Assemble: Flight Force, a new thrilling rollercoaster in which Guests can meet Iron Man as one of the most advanced animatronics in Disney Parks worldwide and join forces with him and Brie Larson’s Captain Marvel in a heroic new mission.

The official Disneyland Paris website describes the attraction as follows:

Despite being a fresh take on a thrilling Disney attraction, reception to the new ride has been mixed, to put it nicely. Back when the land first opened, we reported that the ride was sitting practically empty all day, only ever reaching a 20-minute wait time. Compare this to the wait times for Spider-Man W.E.B. Adventure, and you start to see how popular Avengers Assemble: Flight Force is proving to be.

Early reactions were not too positive either, with most Guests feeling indifferent to the new experience. Guests aren’t the only ones not entirely thrilled by the attraction, however. As reported by OutsideEars, Disneyland Paris management has expressed their dissatisfaction with this new attraction.

The reaction to the ride from executives is so poor that OutsideEars is reporting that Disney is already working on elements of the ride and could be planning a complete shut down for the attraction so it could be refurbished:

Our sources interviewed, who also expressed their disappointment with the quality of the adventure well before the opening, tell us that this failure would be due to a lack of budget. They tell us that the management of Disneyland Paris, project owner, was alerted several months ago and would have been slow to react. One of them tells us “that it is not time to settle your accounts anyway, but to find solutions to improve the attraction as quickly as possible”.

This would be quite a stunning move as we have not ever seen Disney take such swift action so soon after opening a brand-new ride.  We are not sure what this refurbishment could include, but it’s possible that Disney would add screens, improve the existing ones, and add various lighting and sound effects to the experience.

Of course, this is just a rumor as of now, so please take this news with a grain of salt. But it is not out of the question for Disney to make alterations to the ride, especially considering what it has and will be doing to other iconic rides like Big Thunder Mountain, Pirates of the Caribbean, and of course, Splash Mountain.

Be sure to check back here at Inside the Magic for more updates!