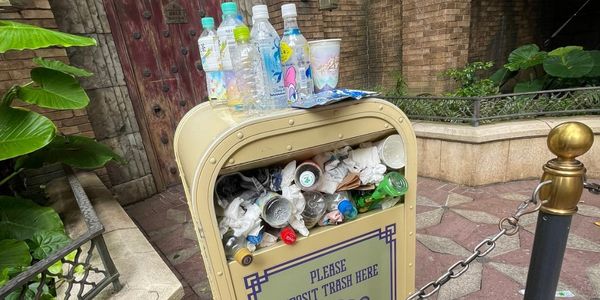 When visiting Disneyland or any of the other Disney Parks and Resorts across the world, Guests have come to expect a world-class experience. From amazing attractions and rides to out-of-this-world food. The Disney experience has been hyped up for decades now and for good reason.

When it comes to the international Disney Parks, Guests tend to hold them in higher regard, at least when it comes to cleanliness. However, a recent photo showed that all Parks sometimes struggle to keep up with the amount of trash that is produced by Guests.

The tweet shared below by Twitter user @disney118dream shows an incredibly-full trash can at the Tokyo Disney Resort.

At least PET bottles must be sorted (Translated)

When asked about this trash can, the original poster asked the following question in a joking manner:

How long have you been left unattended … bitter smile (Translated)

The thread ended with the user saying, “Well ~ But it looks so bad that I’m worried.” The idea of having trash cans 30 feet apart from each other was something that Walt Disney himself created as the magic number in terms of what would be needed to ensure that Disneyland was never dirty or filled with garbage.

You may also notice that you cannot buy gum on Disney property, yet another rule instilled to ensure Walt’s vision of creating a clean theme park is upheld.

We are sure this issue was eventually taken care of by Disney Cast Members. Guests are always encouraged to put their trash away in the proper place, as it helps keep the Parks clean and enjoyable for future Guests.

Have you ever seen a trash can like this at Disney?