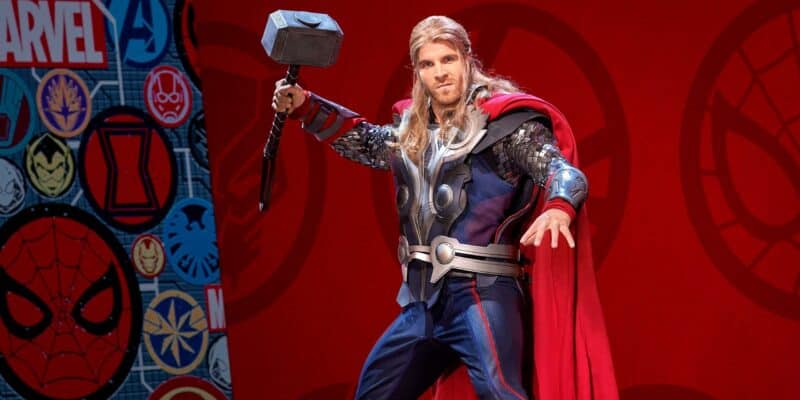 When visiting Avengers Campus at Disneyland Paris, Guests are able to join forces with their favorite superheroes and help them in missions to protect the Earth. The land will be home to two attractions,  Spider-Man W.E.B. Adventure and Avengers Assemble: Flight Force, where Guests will be able to meet Iron Man as one of the most advanced animatronics in Disney Parks worldwide. Guests can also shop for all their superhero needs at the different stores and enjoy an Avenger-worthy meal at PYM Kitchen, Stark Factory, and the food trucks around the Campus

This new take on the Park’s “E-ticket” attraction features Captain Marvel and Iron Man instead of the legendary band Aerosmith, putting Guests into their very own Marvel adventure. However, Guests are not rushing in swarms to experience this ride like we thought they might.

At Avengers Campus in Disneyland Paris, Guests also have the opportunity to meet Thor and Loki in a fun and interactive experience. A pedestal behind the characters acted as a “sword in the stone” experience where Guests could test their strength and worthiness in an attempt to pick up Mjölnir, Thor’s legendary weapon.

However, this experience is gone from the Park now just months after opening, as confirmed by ED92 (@ED92Magic) on Twitter:

In Avengers Campus, Thor and Loki’s pedestal has been completely removed, due to guests climbing on it and damage. Hopefully it has been removed to repair and strengthen and will return soon

In Avengers Campus, Thor and Loki’s pedestal has been completely removed, due to guests climbing on it and damage. Hopefully it has been removed to repair and strengthen and will return soon.#AvengersCampusParis pic.twitter.com/pvsyc2iuEB

As you can see, the pedestal is now gone, with trash cans over the spot where it once resided. This was reportedly removed due to unruly Guest behavior and damage to the actual piece. Hopefully, this returns soon to Avengers Campus at Disneyland Paris.

Disneyland Paris is somewhat notorious for its Guests taking liberties in the Park and across the Resort. Recently, one Guest even brought their own pillow to lay down with at the Park. We also reported on Guests tearing down water hoses at the Park, which were put in place to help combat the previously mentioned high temperatures. When visiting Disney, it is important to remember to follow the rules and remain in the allowed areas

You can see what this area used to look like, as shown in a video from dlrpfans on YouTube:

Have you been to Disneyland Paris? Have you visited Avengers Campus?