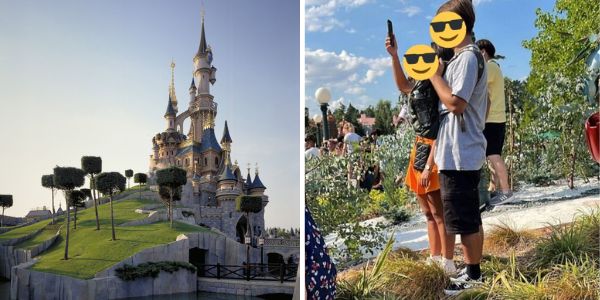 If you have visited any of the Disney Parks and Resorts, you will have probably noticed all of the incredibly-detailed areas and buildings. A lot of these are for Guest use, but some are inaccessible. It’s a dream of every Disney Park fan to find their way into an off-limits area just to see what it actually looks like inside, but Disney has rules for a reason. Guests are expected to follow them and stay out of areas they are not supposed to be in.

Recently, it seems like Disneyland Paris has been having a lot of issues keeping Guests from breaking rules in the Park.

Related: Guest Breaks Rules, Zips Past Others on Scooter in Disney Hotel

Disneyland Paris has been going through a lot of changes recently, as the Park celebrates its 30th anniversary. Disneyland Paris also welcomed its own version of Avengers Campus at Walt Disney Studios Park.

When visiting Avengers Campus at Disneyland Paris, specifically at Walt Disney Studios Park, Guests will be able to join forces with their favorite superheroes and help them in missions to protect the Earth. The land will be home to two attractions,  Spider-Man W.E.B. Adventure and Avengers Assemble: Flight Force, where Guests will be able to meet Iron Man as one of the most advanced animatronics in Disney Parks worldwide. Guests can also shop for all their superhero needs at the different stores and enjoy an Avenger-worthy meal at PYM Kitchen, Stark Factory, and the food trucks around the Campus. The land has been a big hit with Guests, and so far, there have been relatively few issues.

However, when it comes to parades, a few Guests decided to think “outside the box” when it came to viewing areas.

A tweet from @dlp_guests_show provided another example of Guests doing as they please in the Parks:

This is not just an issue at Disneyland Pairs, unfortunately. We reported on a Guest climbing out of a boat while on Living With the Land in an attempt to steal a cucumber as well as another Guest climbing into an off-limits area of Cinderella Castle.

At Disney World, the rules are laid out as follows:

In Disneyland Paris, Guests are held to the following standards:

Theft, public disorder, verbal and physical violence, insults or racial taunts, cheating, fraud, drunken or indecent behaviour, malevolence, violations of safety regulations and these Park access rules, or other socially unacceptable behaviour, may lead Euro Disney Associés S.A.S. to take the necessary action including informing the police, filing a complaint or removing the visitor from the Park(s) without any sort of compensation, refund or claim.
For safety reasons, reckless running is not allowed.
For the safety, comfort and enjoyment of all visitors, please keep the Parks and their facilities clean. Group picnics which require specific equipment (cool box, tables, and containers) are not allowed inside the Parks. For your convenience, a specific picnic area is located between our parking lot and the Park entrance.
For the safety and comfort of all, we ask that visitors do not eat, drink, and take flash photography or film with lighting in the attractions or their queue lines.

Have you ever witnessed someone breaking the rules at Disney?