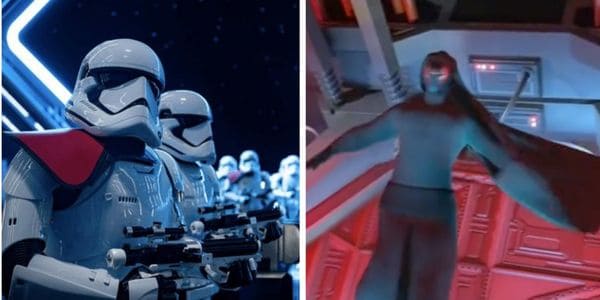 In recent years, Walt Disney World and Disneyland have both stepped up their attraction game quite a bit, offering incredible, state-of-the-art experiences that completely immerse Guests into the attraction.

Flight of Passage in Pandora – The World of Avatar at Disney’s Animal Kingdom is a jaw-dropping good time, and the upcoming TRON Lightcycle/Run coaster will be sure to please thrill chasers once it opens in Tomorrowland at the Magic Kingdom.

However, Star Wars: Rise of the Resistance, located in Star Wars: Galaxy’s Edge is perhaps Disney’s most ambitious and high-tech attraction, featuring multiple ride systems and amazing animatronics, at least when things go to plan.

We have seen many, many examples of breakdowns since the ride has opened, but never have we seen a malfunction quite like the one shared on social media recently.

A video went viral recently all over social media including Twitter and TikTok, and showed Kylo Ren, the main antagonist of Disney’s sequel Star Wars trilogy spinning uncontrollably. You can check out the hilarious video below, shared by @roberttolopi:

Is it supposed to just spin in a T pose

♬ You Spin Me Round (Like a Record) – Dead Or Alive

As you can see, Guests approach the end of the ride, where Kylo Ren finally confronts Guests. Usually, the ship is hit by gunfire from other ships, causing a big metal beam to collapse on top of Kylo, and Guests have their final opportunity to escape.

However, as you can see in the video, this is not so much the case. The Kylo Ren animatronic figure just spins around uncontrollably while “t-posing,” certainly not the intimidating encounter he was probably hoping for. This is not due to a breakdown, however as the original poster of the video edited the video to make it seem like the animatronic was spinning.

We saw another example of this video trickery earlier this month, with one Guest convincing the internet that he had walked off of Pirates of the Caribbean. While that video was certainly impressive, this Kylo Ren animatronic one is even more impressive, and considering the history of technical difficulties this ride faces, it wouldn’t be surprising if this actually happened.

How to Experience Star Wars: Rise of the Resistance

The use of the virtual queue is currently paused at Star Wars: Rise of the Resistance. Guests may experience the attraction using a traditional standby queue. Availability of a standby queue may be limited and is subject to change at any time without notice. Virtual queue may be used again at a later date or from time to time. Experiencing the attraction is not guaranteed.

If you ever have to actually evacuate a Disney attraction due to a breakdown, do not fret! A Cast Member will always ensure you can exit safely, and oftentimes, Guests will receive a Lightning Lane pass so that they can bypass another standby queue to make up for their lost time.

Have you ever experienced a breakdown or malfunction on a Disney ride?