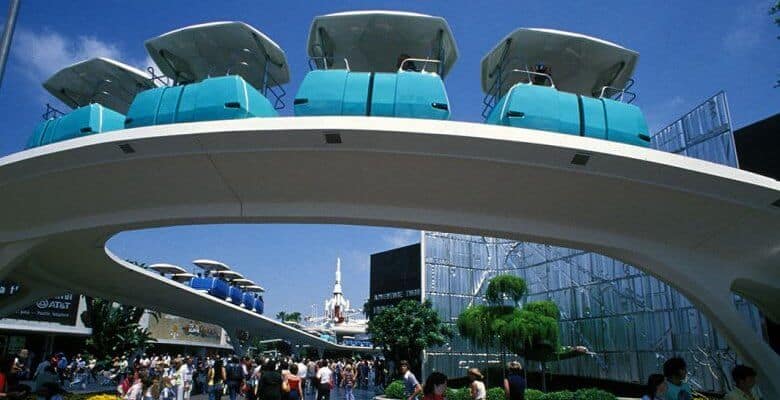 While Disneyland is filled with so many iconic and classic attractions like Peter Pan’s Flight, “it’s a small world” and Pirates of the Caribbean, few can compete with the legacy of the original PeopleMover.

The PeopleMover, sometimes called the Goodyear or WEDWay PeopleMover, was a popular transport attraction located in Disneyland’s Tomorrowland in Southern California. The ride officially opened on July 2, 1967. On the PeopleMover, Guests would board four rows of “futuristic” cars propelled with Goodyear tires which were strategically positioned in the tracks that pushed the cars on the beams.

Quickly gaining popularity, the attraction saw various updates and temporary re-themes as the PeopleMover made its way through Space Mountain and the now extinct Adventures Thru Inner Space.

Unfortunately, the ride closed forever on August 21, 1995, being replaced by the infamous Rocket Rods, a ride that many would consider a failure.

However, to get back to Disneyland in California, Guests have been extremely vocal about the current state of the PeopleMover, claiming it’s extremely ugly and an example of “bad-show” at the Resort. Since its closure, nature has been slowly taking over the tracks, with trees and vines as well as rust completely covering the remnants of the attraction.

However, just today, Guests noticed that tress was trimmed around parts of the track, an extremely rare move from the Disneyland Resort.

AYO BRUH THEY TRIM THE TREE ON THE TRACK

AYO BRUH THEY TRIM THE TREE ON THE TRACK 👀👀👀 pic.twitter.com/sHScSR8EAp

As many Guests have pointed out for decades, you can still see the empty beams that once propelled Guests high above the Disneyland ground throughout Tomorrowland, including in the Space Mountain queue area. While driving through Autopia, you’ll still see the discolored PeopleMover beams standing tall throughout the area. The support rails for the PeopleMover began deteriorating when the Rocket Rods called Tomorrowland home, as the attraction demanded too much of the beams to carry the fast-moving and always breaking cars throughout Disneyland.

However, with Disney removing the trees that were on the track, we can’t help but get a little excited, especially considering all the rumors surrounding the attraction as of late.

For those who are unaware, Disneyland is expected to announce a refurbishment of Tomorrowland sometime soon, breathing new life into the area once again. With D23 coming up next month, all of the pieces seem to be potentially falling into place for a PeopleMover refurbishment announcement.

In the comment section of the tweet, several users discussed the possibility of a full refurbishment of the PeopleMover.

Was there yesterday and noticed that they definitely hadn’t trimmed the trees at other points in the track, like coming out of Circle-Vision…so this is an interesting move  We should keep an eye out on the rest of the track now.

One user claimed to have seen “suit types” on the tracks:

When there in early July I noticed a lot of suit types looking over the tracks in different areas.

Another user also claimed to have seen workers at the tracks:

Back in spring I saw someone working up on the station, it was almost at park closing so it felt very incognito! I was suspicious…

Trimming trees may seem like a small and inconsequential move from Disney, but any work near or at the PeopleMover tracks always gets our attention. While this is all still speculation at this point, we are super excited for the future and look forward to whatever Disney has in store.

Do you hope to one day see Disneyland’s PeopleMover back in action?