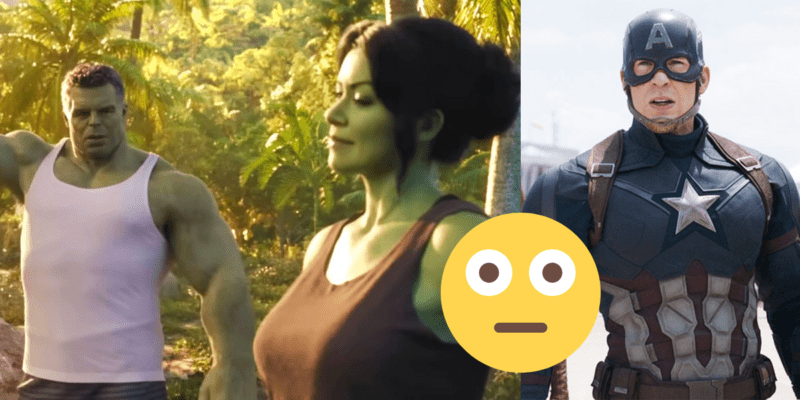 In the show’s first episode, which premiered on Thursday, Walters trains with her cousin, Bruce Banner, as she learns to accept her new role as a Hulk. While training, Walters talks about some of the other Avengers, like Tony Stark (Robert Downey Jr.) and Captain America, formerly played by Chris Evans and now by Anthony Mackie.

Walters and Banner reference a joke from Avengers: Endgame (2019) in which Ant-Man (Paul Rudd) says Captain America’s butt is “America’s *ss.” They also joke about Captain America/Steve Rogers being a virgin since he’s originally from the 1940s, and having sex before marriage was more taboo then.

In the episode’s post-credits scene, a drunken Banner reveals to Walters that Rogers did have sex with a woman and wasn’t a virgin. The scene ends as Walters shouts, “Captain America f**ks!”

Evans responded to this scene on Twitter today, simply writing:

Sorry bro. It was under extreme duress.

Sorry bro. It was under extreme duress.

She-Hulk: Attorney at Law is one of the first Marvel projects to address sex head-on. Iron Man (2008) and Eternals (2019) both had minor sex references, but the newest Disney+ series is purported to be “very sex positive” and full of “cool feminist commentary.”

Inside the Magic will report on any exciting developments as She-Hulk: Attorney at Law streams every Thursday on Disney+.

What do you think of the first episode of She-Hulk: Attorney at Law?