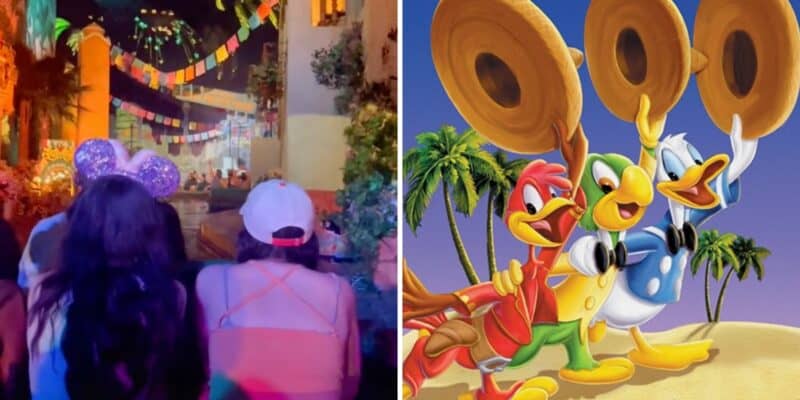 Disney attraction soundtracks are often as revered as the ride itself.

If someone were to mention The Haunted Mansion, chances are that fans are already singing “Grim Grinning Ghosts” in their heads.

Hearing the Soarin’ theme might bring with it feelings of a cool breeze or the scent of fresh grass.

The smell of stagnant water might make fans hum “Yo Ho (A Pirate’s Life for Me)” as they might have on the classic Pirates of the Caribbean attraction.

Catching any one of the six songs in the Guardians’ “Awesome Mix” on the radio might mentally teleport someone deep into space as if they were riding front row at EPCOT’s Guardians of the Galaxy: Cosmic Rewind.

The list of ride theme songs is long and loved by many — But what happens when a ride often known for its music breaks down, forcing fans to finish the experience in silence? A magical moment that gave us chills!

Disney Guests riding  Gran Fiesta Tour Starring The Three Caballeros made “their own soundtrack” when the ride faced technical difficulties:

When the ride breaks down at Disney World so everyone decides to make their own sound track! #disneyworld #disney #epcot #disneyridebreakdown

When the ride breaks down at Disney World so everyone decides to make their own sound track! #disneyworld #disney #epcot #disneyridebreakdown

TikToker Megan H. posted the wholesome moment after a ride on the Gran Fiesta Tour Starring The Three Caballeros didn’t go as planned.

Located in the World Showcase at EPCOT, the family-friendly ride is meant to highlight the sights of Mexico to the serenading sounds of The Three Caballeros, a trio of birds that star in the 1944 Disney film of the same name.

Recently, the broken down attraction left dozens of Guests floating downstream with no sound. As a result, they took the music into their own hands as multiple boatloads belted Whitney Houston’s “I Wanna Dance with Somebody (Who Loves Me)” at the top of their lungs for the duration of the ride.

In an even more wholesome twist, commenters on the clip recognized themselves as passengers in the boats ahead, connecting the Guests once again in a way that random social media posts are often good for.

“This is us!!” Ariel Comer commented. “We were the ones playing the song on the back of the boat in front of you!!”

The original poster was happy to hear from the fellow rider.

“Stop! Hey Friends!” Megan H. replied to the stranger. “Thanks for making the breakdown more fun!”

Commenters agreed that the Guests “pass the vibe check.”

The experience serves as a master class for Guests who find themselves caught on a broken down ride at the Disney Parks.

Take in the sights of Mexico and the antics of 3 feathered amigos on this gentle boat ride through the Mexico Pavilion.

¿Dónde Está Donald Duck?
Donald’s disappeared south of the border, and it’s up to the other 2 caballeros from the musical trio—Panchito, the Mexican charro rooster, and José Carioca, the Brazilian parrot—to find him.

Have you ever been stuck on a broken down ride? How did you handle it? Tell us your experience in the comments.