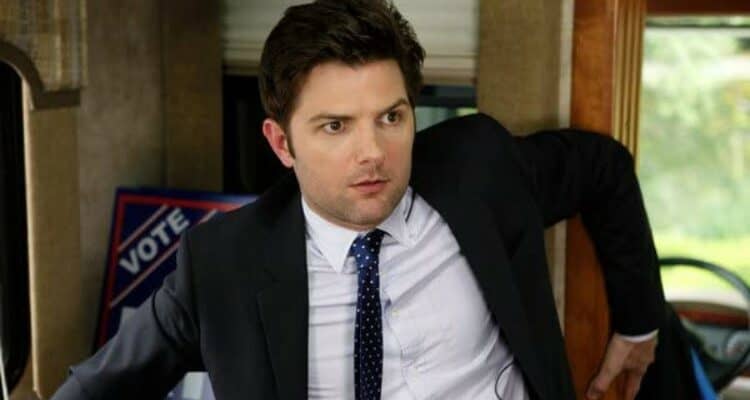 Wait, is there a new Spider-Man in town?

Recently, Sony’s Madame Web (2023) starring Dakota Johnson as the titular character has been the subject of much speculation. Directed by S.J Clarkson, this will add to Sony’s slate of Spider-Man Universe (SSU) films — ironically, without a known, central Spider-Man character.

Currently, the Sony Spider-Man Universe features Tom Hardy’s (Eddie Brock) Venom (2018) and the sequel Venom: Let There Be Carnage (2021), as well as the much-memed Morbius (2022) starring Jared Leto (Morbius). In the interest of villains, Aaron Taylor-Johnson will take on the role of Kraven the Hunter in Kraven (2023)

Now, a new set photo leak might give us a sneak peek into the next big casting announcement within the Sony Spider-Man Universe franchise.

Adam Scott (Parks and Recreation) has been spotted recently on the set of Madame Web, and online spaces have been rife with speculation on the role that he’ll be playing. The actor, who most recently starred in Severence on Apple TV+, was cast in the upcoming Sony Pictures movie last month but it is only recently that fans have started to pair Scott with the possibility of playing a new Variant of Peter Parker.

Naturally, Spider-Man fans have been discussing the likelihood that Adam Scott might be stepping into the spandex-covered boots of the Friendly Neighborhood web-slinger — albeit as an older version of Peter Parker.

This Peter Parker might show a striking resemblance to one Peter B. Parker (Jake Johnson) in Sony’s animated feature Spider-Man: Into the Spider-Verse (2018) and the upcoming sequel Spider-Man: Across the Spider-Verse (2024), where Peter is older, experienced and likely more jaded than the more wide-eyed, youthful iteration of Peter in Marvel Studios’ Marvel Cinematic Universe, played by Tom Holland.

All of these beloved Spider-Men joined forces in 2021’s Spider-Man: No Way Home, after a highly secretive filming period before superhero-landing onto the big screen to much fanfare.

The notion of Variants and the Multiverse came to prominence, at least in Kevin Feige’s MCU, during Marvel Phase Four, with projects like Loki and the animated series What If…? proving there are infinite possibilities and infinite versions of the same beloved heroes.

We think Scott could definitely pull off an older, 30-plus Peter Parker, as he definitely knows how to give off a certain “mature” vibe that could fit the role.

What do you think of this potential casting choice? Do you think Adam Scott will be Sony’s new Peter Parker? Comment down below with your thoughts!

Madame Web (2023) is an upcoming Sony Spider-Man Universe (SSU) film led by Dakota Johnson as Madame Web, based on the Marvel Comics series of the same name. Directed by S.J. Clarkson, Madame Web is scheduled to release in cinemas on October 6, 2023.