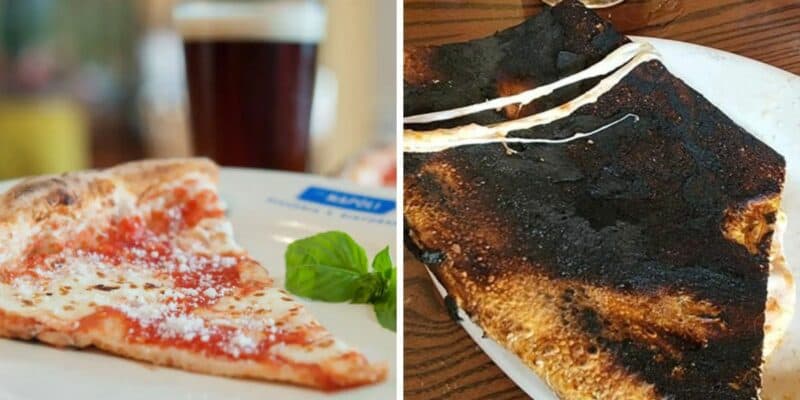 We recently reported on how Disney Guests are complaining about the quality of food at Disney restaurants. This comes after Walt Disney Company CFO Christine McCarthy indicated that in order to start cutting costs, Disney plans to begin “reducing portions” at Disney Parks restaurants as it “would be good for Guests’ waistlines.”

Well, it seems that portion control isn’t the only issue at the Disney Parks as Guests have also complained about the quality of the food itself.

Via Napoli at EPCOT in Disney World is known for its authentic Neapolitan pizza. Disney World’s website states:

The thin-crust pizzas are made with fresh mozzarella cheese, San Marzano tomatoes and real Caputo flour imported from Southern Italy. Water for the dough is even sourced from a spring similar to Italy’s Campania region. Pizzas are then cooked in wood-burning ovens named after the 3 active volcanoes in Italy—Mount Etna, Mount Vesuvius and Stromboli.

To ensure every detail is perfect, famed restaurateur Nick Valenti spent time in Naples studying the art of dough, crust, sauce and oven temperatures at the famous pizzerias Da Michele and Trianon before creating the menu at Via Napoli Ristorante e Pizzeria.

A Disney World Guest, Dan B., recently dined at Via Napoli in EPCOT and ordered the famous pizza. However, when he took a bite he realized that it was a tad overcooked.

In the image below, you can see that Dan flipped his pizza over and noticed the bottom crust was completely burnt.

Dan showed the waitress at Via Napoli, who agreed the pizza was way too overcooked. The waitress brought the pizza back and brought out a brand new one to Dan within 10 minutes.