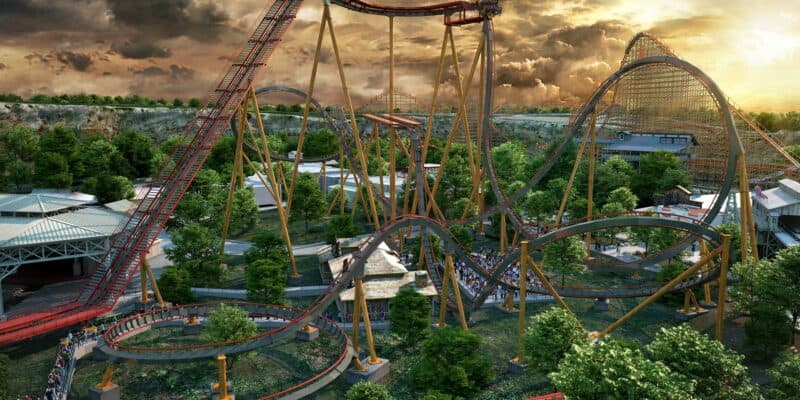 The highly anticipated opening of this new coaster has hundreds of Guests eagerly waiting to ride it despite high temperatures.

Temperatures of nearly 100 °F have not stopped hundreds of thrill-seekers, who eagerly waited in line under the blazing sun to experience one of the most thrilling coasters in all of Texas on its official opening day.

As shared by Six Flags Fiesta Texas (@SF_FiestaTexas) on Twitter:

Join us in Crackaxle Canyon Screampunk District at noon, July 30 for a special presentation and official grand opening ceremony of Dr. Diabolical’sDiabolical’s Cliffhanger with our Park President Jeffrey Siebert.

While Six Flags’ new coaster is now open to all Guests, Six Flags Pass Holders will have the chance to ride this attraction during exclusive ride times. Guests must provide their valid pass card to participate on the day and time allotted for their pass level. Per Six Flags Fiesta Texas’ website, these exclusive ride times will follow the schedule below:

In celebration of this massive achievement, Six Flags Fiesta Texas will also hold special events tonight and on August 6, 13, and 20. Dr. Diabolical’s Screampunk Bash will be an exclusive after-hours party that will give Guests access to South Texas’ biggest thrills. Tickets for this exclusive event are $24.99 plus taxes and will include:

You can learn more about this event and get your tickets by clicking here to go to the official Six Flags Fiesta Texas website.

With the Immelmann inversion and a top speed of 60 miles per hour mentioned in this description, Dr. Diabolical’s Cliffhanger will become the world’s steepest dive coaster, providing a terrifyingly exciting challenge for the bravest of thrill-seekers.

We have recently seen Six Flags make tremendous efforts to continue improving its Parks across the country, with Six Flags Discovery Park in Vallejo, California, and Six Flags St. Louis, in Eureka, Missouri opening new thrilling attractions for Guests to enjoy. And over at Six Flags Magic Mountain in Valencia, California, the tallest and longest single-rail coaster on the planet, according to Six Flags, is opening this month!

Plus, big things are coming to Six Flags Parks in Texas. Six Flags Fiesta Texas just opened its groundbreaking dive coaster, Dr. Diabolical’s Cliffhanger. And it was recently announced that AQUAMAN: Power Wave is set to open next year at Six Flags Over Texas. The ambitious projects are sure to bring loads of fun for Guests at the Texan Parks and call on more than a few thrill-seekers who will visit from all over the country to experience these exciting new attractions.

Will you ride Dr. Diabolical’s Cliffhanger? Let us know in the comments below!