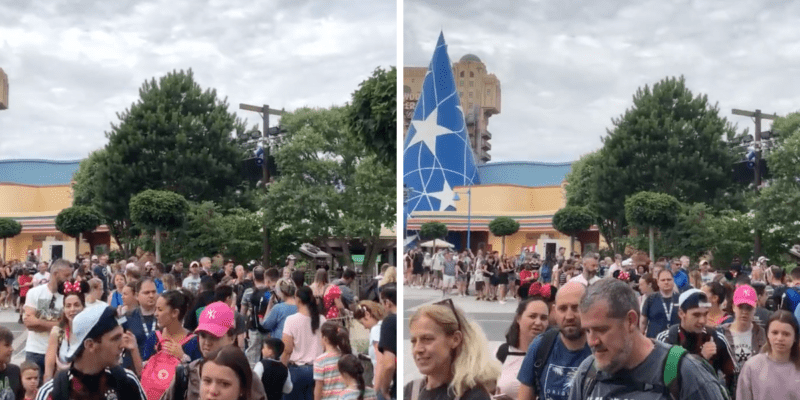 Yesterday, Inside the Magic reported that Disneyland Paris hit capacity and had to turn Guests away at the gate. And it looks as though that may happen again today as morning crowds are rushing into the theme park.

Guests can also experience iconic attractions such as Tower of Terror and Crush’s Coaster. Guests were so eager to ride Crush’s Coaster this morning that the early AM crowds were insane.

Twitter user PixieDust was visiting Disneyland Paris this morning and took a video of the crowds in line for Crush’s Coaster, writing:

We want to note that if you want to experience everything Disneyland Paris is offering, you must need both a Park ticket and a Park reservation to enter.

If you plan on visiting one of these theme Parks, Guests need both a valid Park ticket as well as a Park reservation. Guests who do not have both a reservation and a ticket, will be denied entry. Typically, if the Park is not already at full capacity, if you have a ticket, you can usually make a theme park reservation for Disneyland Paris the same day to visit either Disneyland Park or Walt Disney Studios.

The Parks seem to be busy as of late, which is good to note as a brand-new land, Avengers Campus, at Disneyland Paris will officially open to Guests on July 20, 2022 — meaning we expect to see the Parks continue to stay crowded.

Are you planning to visit Disneyland Paris for the 30th anniversary? Let us know in the comments below.