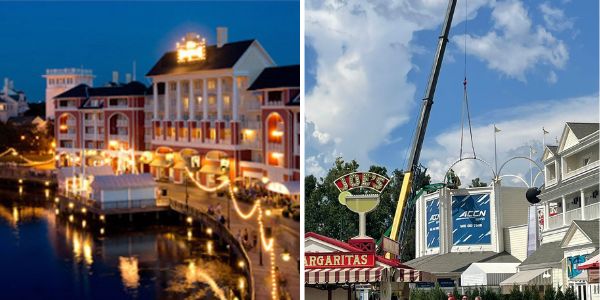 After a long run at one of Disney’s most popular Resorts, one building is now being completely destroyed and demolished.

You heard that right, as part of a massive, multi-year project at Disney’s BoardWalk Resort, one popular building is now being demolished. Communications Manager, Lesley Harris, shared the exciting news that the Resort would be reworked to Disney Parks Blog earlier this year. The announcement included many projects that Walt Disney World intends to implement at the popular Resort:

The Cake Bake Shop by Gwendolyn Rogers is set to become the Resort’s premier bakery hotspot, “And with this new sweet spot on the horizon, the BoardWalk Bakery will become a new sandwich shop for guests to enjoy a bite along the water’s edge, joining other current food and beverage locations like BoardWalk Ice Cream.”

And now, another piece of Disney history is slowly being removed. The specific building used to be the ESPN Club. The destruction was confirmed in a tweet from Reporter Scott Gustin (@ScottGustin) which is linked below:

Crews are now dismantling portions of the ESPN Club at Disney’s Boardwalk. The venue opened in 1996 and permanently closed earlier this year.

Crews are now dismantling portions of the ESPN Club at Disney's Boardwalk.

The venue opened in 1996 and permanently closed earlier this year. pic.twitter.com/r6iyT14bLK

It is expected that The Cake Bake Shop by Gwendolyn Rogers will take hold of this area once demolition and construction are complete. Disney describes the BoardWalk as follows:

This is just the latest development at the ever-changing and improving Walt Disney World Resort. Recently, EPCOT received a brand-new attraction in the form of Guardians of the Galaxy: Cosmic Rewind, the Park’s first-ever roller coaster. in 2019, Disney’s Hollywood Studios saw the opening of the massive Galaxy’s Edge expansion, transporting Guests into the world of Star Wars.

This is also just another beloved Disney property to be destroyed as we recently saw the fan-favorite Tower of Terror sign completely removed. This sign has been a roadside staple for Guests since the 90s and we hate to see it go.

Have you ever stayed at Disney’s BoardWalk?