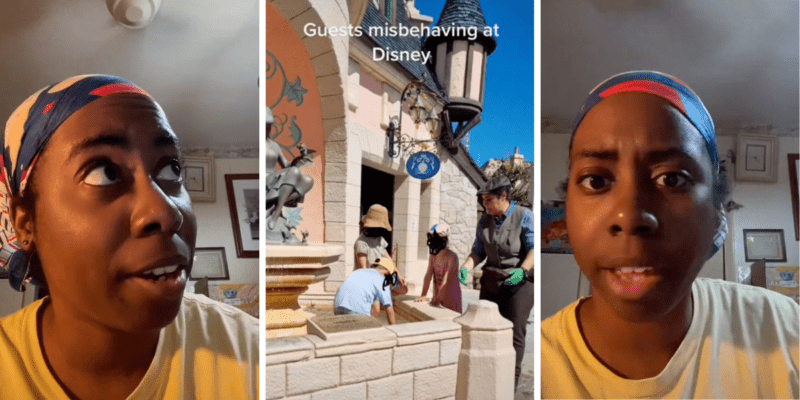 Earlier this week, we reported on a viral video showcasing Guests breaking the rules at Walt Disney World, Disneyland, and Disneyland Paris.

Rulebreaking has become somewhat of a trend at Disney Parks, with Guests hoping to be the next viral star by doing the craziest thing they can think of. A recent disturbing trend even encourages Guests to dip their bare feet in Magic Kingdom ride water!

Now, a devoted Disney Parks fan is speaking out on TikTok. @csopranodiva shared the viral video with a response:

She continues, pleading with Guests to follow the rules and not ruin the fun for other Disney Parks Guests:

“Ugh. It’s like y’all don’t read the fine print anymore. Why is it so hard to follow the rules? Somebody, please explain this to me. I’m going to say it again. Hopefully, y’all hear me from around the world. Stop it!”

In the comments, the fan referenced the recent social media trend of bashing so-called “Disney Adults” by saying:

“They aren’t the real Disney Adults.”

Disneyland Resort, Walt Disney World Resort, and Disneyland Paris have lengthy rules that Guests agree to when entering the Disney Parks and Resorts. All Guests are subject to bag checks, metal detectors, and a dress code. Prohibited activities at Disney include, but are not limited to:

It’s essential to follow all rules at the Disney Parks and Resorts to ensure your safety and the safety of other Guests and Cast Members.