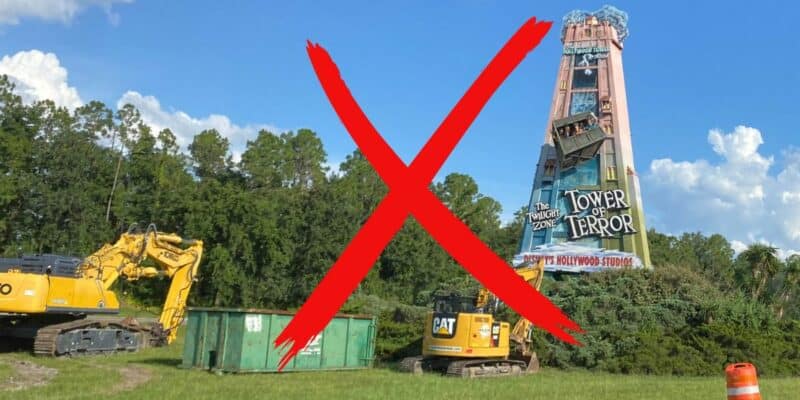 Out with the old and in with the new… It has been confirmed that Disney will permanently remove the iconic promotional sign of Disney’s Hollywood Studios’ Tower of Terror on World Drive. And it seems that demolition will begin very soon as bulldozers have already parked outside.

When Guests used to drive down World Drive, they would be met with an enticing promotional sign of Disney’s Hollywood Studios’ Tower of Terror. The sign, which you can see in the photo above, is of a free-floating elevator shaking and moving within the famous Hollywood Tower Hotel that got Guests excited to enter the theme park and take on this thrilling ride.

However, for quite some time, the elevator on the Tower of Terror sign on World Drive was not in motion — instead, the sign simply stood still. Though, the Tower of Terror billboard still promoted the popular Disney’s Hollywood Studios attraction, it’s obvious that without the movement of the elevator, it is not as enticing for Guests.

In March 2021, Disney World finally fixed the famous Tower of Terror sign and the free-falling elevator is once again moving and shaking — unfortunately, however, it did not last long and the sign has been broken for nearly a year now.

Yesterday, it was confirmed that the iconic sign will be removed, and it seems that process is going to happen sooner rather than later as bulldozers have already appeared on site.

Good-bye, Tower of Terror billboard. Disney World plans to remove the decades-old sign located in the median on World Drive and replace it with landscaping.

Good-bye, Tower of Terror billboard. Disney World plans to remove the decades-old sign located in the median on World Drive and replace it with landscaping. pic.twitter.com/WXRDK1NewF

At this time, it is not clear if Disney will be putting up a new sign in its place, but Inside the Magic will update you as we get information.

Are you upset to see Disney demolish the Tower of Terror sign? Let us know in the comments below.