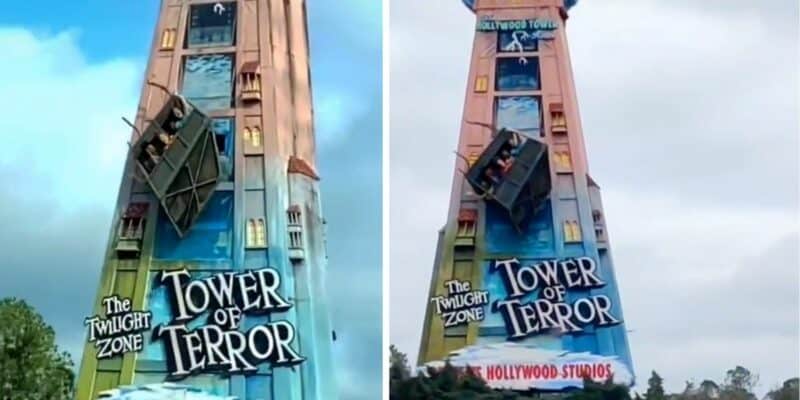 When Guests are driving through Disney Property, there is so much to look at. You will likely pass by the entrance for at least one theme park and see iconic rides in the distance; there are over 25 Disney Resorts to see, Disney Springs, Blizzard Beach, Typhoon Lagoon, and more.

On top of this, there are a lot of fun signs that allow Guests to build up excitement for their visit to Disney World. While en route to Disney’s Hollywood Studios, Guests will be able to enjoy one sign for a very popular attractions. Tower of Terror is located at the end of Sunset Boulevard at Disney’s Hollywood Studios. The attraction pulls Guests in before they even step foot in the park as the ride looms over the Park and can be seen from the road. But before you even see the ride, you will see a Tower of Terror sign.

Disney created the sign, which is a giant Tower of Terror structure with a 3-D added element of Guests sitting in the ride vehicle. The sign is meant to shake the riders, creating a captivating movement effect on the signage, which will have Guests driving by noticing it, and giving them a reason to be excited to ride Tower of Terror.

Unfortunately, the sign has a few issues that have not been allowing it to function as it was intended to. We previously covered that the then-broken sign was fixed at World Drive. Although this was exciting news, it was a fix that did not last long. We have noticed that the sign has been broken as of late, and now, others are starting to see it as well.

DisneyWorldTom (@waltdisneyworldparks) posted a video of the sign working, but noted also shared that it is once again broken.

♬ Reminds me of my childhood – DisneyWorldTom

One user responded to the video noting, “I drive by it every day for work and I’ve never seen it move,” and another stated, “I didn’t even know it was supposed to move.”  The idea of Guests not knowing the sign moved carried on throughout the comments, which just shows how long the sign has been broken for.

Are you a fan of the Tower of Terror sign? Let us know in the comments below.