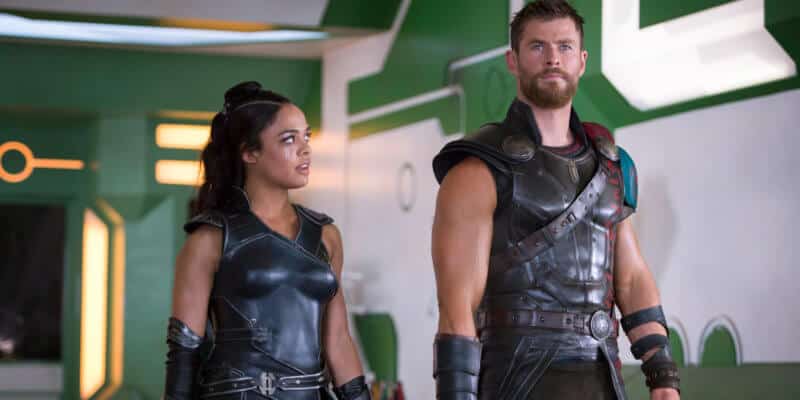 One Marvel star has apologized to Marvel Studios and The Walt Disney Company after accidentally leaking unknown information. Did the Marvel police strike again?

In less than a month, the newest addition to Marvel’s Thor series of films, Thor: Love and Thunder (2022) directed by Taika Waititi, will see actress Tessa Thompson return as Valkyrie — the effortlessly cool and blunt, wisecracking drunk introduced to audiences in Thor: Ragnarok (2017).

The previous Thor installment, also directed by Waititi, saw the last surviving member of the elite group of Asgardian all-female warriors form an unwitting team with Thor Odinson (Chris Hemsworth), a supposedly-reformed Loki (Tom Hiddleston), and an internally-Hulk-conflicted Bruce Banner (Mark Ruffalo), all working together in a bid to save the planet Asgard from certain doom.

This time, Thor 4‘s Valkyrie will join Chris Hemsworth’s Thor again on a journey across the galaxy, meeting up with a new-and-improved, Mjolnir-wielding Jane Foster (Natalie Portman/Mighty Thor) to take on Gorr the God Butcher (Christian Bale). However, she’s been hinted to take on a slightly different, more ‘reformed’ position — as King of New Asgard on Earth. With the new role and responsibilities post-assuming the crown, the reigning Asgardian monarch ‘King Valkyrie’ is expected to naturally undergo a costume change — but fans were not prepared for the reveal to come so soon, nor were they expecting the way the new costume got leaked.

In an interview with Fandango All Access, the Thor: Love and Thunder star Tessa Thompson claimed that the Marvel spoiler getting out this time, “wasn’t [her] fault!”.

Instead, she revealed that it was actually her stepmom who posted the selfie featuring Valkyrie’s new threads to Instagram, that Thompson had sent previously in confidence.

“It’s a big thing and she feels terrible.”

Thompson added for context, defending her stepmother, before quickly apologizing to Marvel and Disney,

“I’m so sorry Marvel, I’m so sorry Disney, it’s not my fault, I will never—I’m never gonna send selfies again.”

Taika Waititi, who directed the film while also voicing the rocky alien Korg, was also present during the interview — seated next to Chris Hemsworth, he chimed in, saying that it was still “nowhere near” what he experienced at the premiere of Thor: Ragnarok.

“I was there—I was behind Mark Ruffalo at the premiere, when he had his phone in his pocket… and he was like ‘great’, sat down and put [his phone] in his pocket with the camera pointing out at the screen!”

Waititi is referring to Ruffalo’s ‘dad moment’ back in 2017 — when the Hulk actor accidentally live-streamed a significant portion of the then-unseen Thor: Ragnarok to his fans and followers, after forgetting to turn off his Instagram Live at an early screening — causing a Marvel Studios freak-out and a news field-day.

He continues to attempt to take some of the heat off of Thompson during the interview, by comedically miming what happened after from his vantage point, adding,

“And someone like, just ran in after ten minutes and was like… pulled the phone out of his pocket, because he had been streaming the movie!”

Marvel Studios and Disney have been notoriously strict on their stars remaining tight-lipped in front of fans, social media and news outlets, and have a history of taking spoilers and leaks extremely seriously.

Benedict Cumberbatch (Dr. Stephen Strange/Doctor Strange) was often paired with Holland for Avengers: Infinity War (2018) press, in an effort to curtail the young actor’s tendency to run his mouth about Marvel projects, in his all-out enthusiasm for sharing with fans.

Recently, Holland was in the news for spoiling Marvel films even ‘internally’, within the closed circle of MCU actors — Ms. Marvel‘s Iman Vellani (Kamala Khan/Ms. Marvel) bemoaned Holland’s penchant for spoilers, claiming that he had shown her a photo of him with Tobey Maguire, spoiling her before Spider-Man: No Way Home (2021) had even released.

However, despite this unfortunate costume leak, Thompson’s Valkyrie is likely safe from the Marvel chopping-block — if Holland managed to get away with a slap on the wrist and a stern talking-to for his many (many) MCU spoiler-related infractions, Thompson (and her stepmom) are probably, ultimately safe from the all-powerful Marvel authorities.

Thor: Love and Thunder opens on July 8, 2022. It will star Natalie Portman (Jane Foster/Mighty Thor) alongside Hemsworth and Thompson, in addition to Russell Crowe as Zeus, Christian Bale as Gorr the God Butcher, and feature the return of Jaimie Alexander as Lady Sif.

Do you think it matters if a Marvel star spoils an upcoming movie? Let us know in the comments down below!