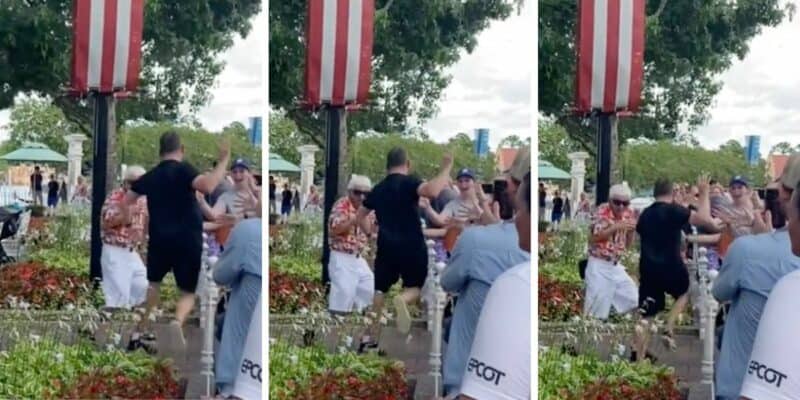 For this year’s Flower and Garden Festival, Guests can look forward to a few brand new topiaries just for Walt Disney World Resort’s 50th anniversary! One of the new topiaries will be displayed at the entrance of EPCOT and will feature Goofy and a 50th-themed birthday cake.

In addition to new topiaries, Guests will also see classic character topiaries like in year’s past such as Snow White and the Seven Dwarfs at the Germany pavilion and Lumiere and Cogsworth at the front of the brand-new expansion to the France pavilion.

The band’s lineup consists of Pierre Bouvier, Chuck Comeau, Jeff Stinco, and Sébastien Lefebvre. All four members have been performing with the music group since the beginning.

TikTok user, disneyfan295, shared a video of the band member running through the crowd, high-fiving Guests’ hands. During the video, you can see the Disney Cast Member standing and monitoring the crowd when the band member ran past him, nearly running into him.

Of course, the band member did not mean to run into the Cast Member as he was just rushing to try and high-five as many Disney World Guest and Simple Plan fans as possible. And we are glad to see that everyone was okay and no one was injured.

If you are not familiar, Disney describes the Garden Rocks Concert Series as:

The Garden Rocks Concert Series will soon be coming to an end. You still have time to catch Herman’s Hermits starring Peter Noone, who will be performing from June 10-13 and Plain White T’s on June 17-20.

Did you see Simple Plan perform at EPCOT’s Garden Rocks Concert Series? Let us know in the comments below.