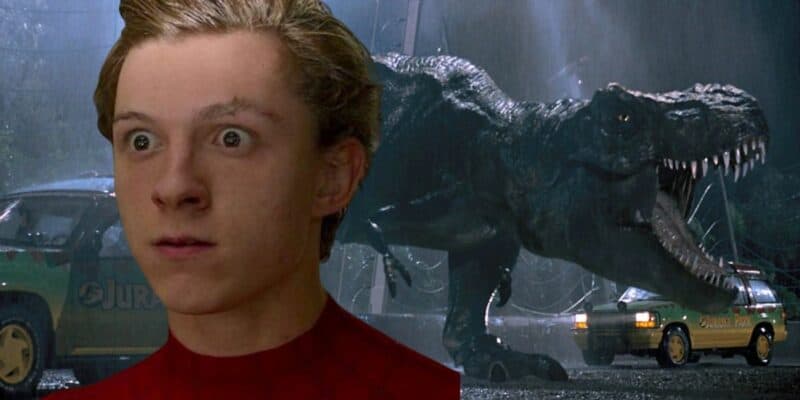 Marvel Comics will release a new Edge of the Spider-Verse comic by Dan Slott and Mark Bagley with contributions also from comic book writers like Alex Segura and Karla Pacheco. Marvel.com revealed that the five-issue limited series will:

“Over the course of five issues, EDGE OF SPIDER-VERSE will introduce brand-new Spider-heroes as well as catch up with classic favorites such as Araña, Spider-Man Noir, Spider-Gwen, and Spider-Man: India! Each thrilling issue will contain three stories packed with debuts, new status quos, and seeds for an overarching saga that will set the stage for THE END OF SPIDER-VERSE, a new epic launching later this year.”

It will also introduce new characters like a variant of Felicia Hardy/Black Cat named Night Spider, Sergei Kravenoff as Hunter-Spider, and Spider-Laird, a Scottish version. And the latest addition to Marvel’s Spider-Man family will be Spider-Rex. The whole event is a lead-up to The End of the Spider-Verse.

Spider-Rex will debut in Edge of the Spider-Verse #1 by hit Spider-Woman creative team Karla Pacheco and Pere Perez. Spider-Rex will also appear on a variant cover for the series by Leinil Francis Yu. Not much is known about the new dinosaur variant of Spider-Man. He could come from a new version of Marvel Comics’ Savage Land.

Savage Land is located in Antarctica at the base of the Palmer Peninsula, is a tropical prehistoric land surrounded by volcanoes and hidden from the rest of the world. It was first introduced in Marvel Mystery Comics #22 (1941) by Jack Kirby and is home to characters like Ka-Zar and Devil Dinosaur. Devil Dinosaur is set to debut in a new Disney Channel Original series, Moon Girl and Devil Dinosaur.

Marvel Studios President Kevin Feige has been rumored to be developing a movie based on the Savage Land to compete with Universal Studios’ Jurrasic Park/Jurassic World franchise, which currently stars Marvel actor Chris Pratt (Peter Quill/Star-Lord) as Owen Grady. The Savage Land also showed up in Doctor Strange in the Multiverse of Madness (2022) as Doctor Strange (Benedict Cumberbatch) and America Chavez/Ms. America (Xohitil Gomez) traversed the Marvel Multiverse.

Are you excited to meet Spider-Rex this August? Let us know in the comments.

Comments Off on Marvel Officially Takes Spider-Man to “Jurassic World”