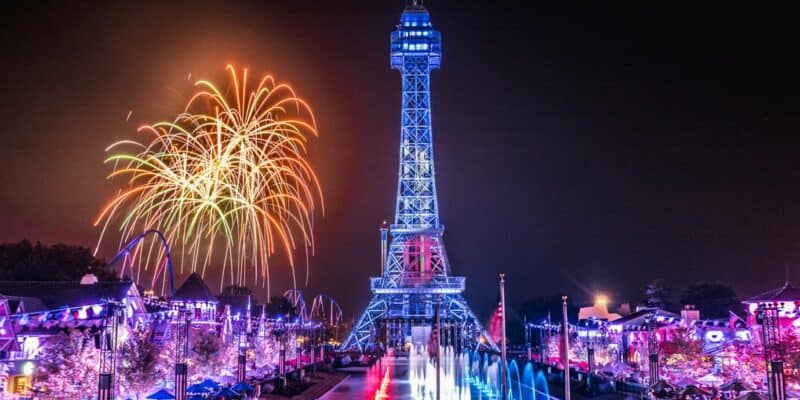 Walt Disney World Resort is not the only major theme park holding a 50th-anniversary celebration recently.

Kings Island is celebrating the unofficial start of summer with a fantastic new fireworks spectacular that will include 200 drones, among other new additions.

The “Fun, Fireworks and Fifty” fireworks show celebrates the Park’s 50 years of fun, thrilling moments and memories with a longer than usual 14 minutes performance of impressive fireworks, fire bursts, laser projection, and the innovative addition of 200 synchronized drones lighting up the sky from International Street. The show also features an all-new song created especially for this celebration and a finale narrated by Barry Williams, best known for his role as Greg Brady in the 1970’s television series, The Brady Bunch.

The show will have performances at 10 pm every night through the summer, weather permitting. Guests can also enjoy a unique dining package that will allow them to sit back and relax in the International Restaurant while they enjoy an exclusive plated dessert created in celebration of Kings Island’s 50th anniversary, as well as the best views of the Park’s all-new Fun, Fireworks & Fifty – A Kings Island Nighttime Spectacular!

This package is only available on Saturdays, and packages are sold only per tables of four, five, or seven Guests, depending on the size of each Party. Guests can learn more about these packages by clicking here.

This new nighttime show premiered last Saturday, May 28th, as Memorial Weekend provided the perfect opportunity for the debut of the latest collaboration between Kings Island and Rozzi Fireworks, the pyrotechnics company that has been behind Kings Island’s nightly celebrations since the Park opened in April 1972.

As reported by Spectrum News 1, Joe Rozzi, Vice President of Rozzi Fireworks, stated, “All of us grew up here. It’s been a part of our family’s history. It’s how we came to be,” referring to the years his family’s company has collaborated with Kings Island, even longer dating back to the Coney Island days.

Rozzi said it’s amazing to see how his family’s fireworks company and Kings Island have grown through the years, getting bigger and more exciting as each decade passes. Part of that process involves taking a chance with new technology to make their fireworks shows better.

“We wanted to add something different to it and we thought, ‘What about drones?’” Rozzi said. And though adding drones to the show was an expensive decision, both companies made it happen.

Rozzi said he couldn’t wait to debut the show to visitors. “The design elements that were incorporated into the show by the design team captures the essence of what this park has meant to generations of people who have come here and grew up here,” he said. “It’s fantastic.”

The Mason, Ohio, theme park is affiliated with Kings Island Camp Cedar. The outdoor resort and campground is just a short drive from the theme park and draws many Guests who come to enjoy the theme park each year. It has both spaces for camping and cottages for families looking to stay near the theme park.

We have previously reported on rather unfortunate events happening at Kings Island and Kings Island Camp Cedar, including a series of accidental emergency calls and an intense brawl that left parties involved severely injured.

Will you visit Kings Island to celebrate the Park’s 50th anniversary? Let us know in the comments below!