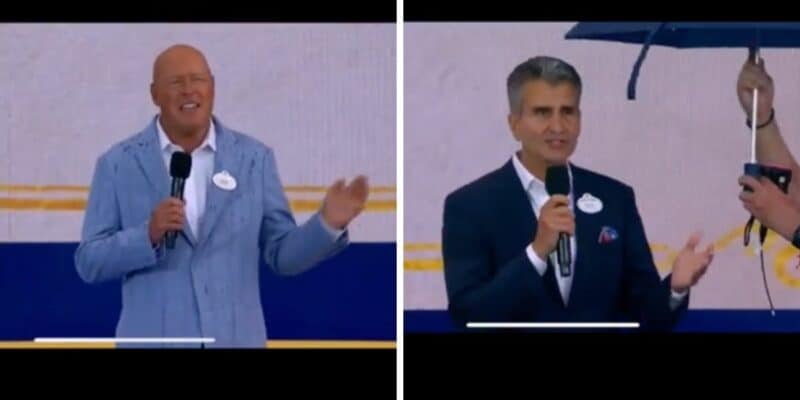 The newest Disney Cruise Line ship, Disney Wish, officially made its maiden voyage yesterday as the christening ceremony took place at Port Canaveral. Guests boarded the ship as they were eager to experience the unique entertainment, one-of-a-kind dining options, and more!

During the christening ceremony, Disney CEO Bob Chapek spoke out about what Guests can look forward to while aboard the Disney Wish. It began to rain while the ceremony was going on, but Chapek continued on with his speech.

After Chapek spoke, Disney Chairman, Josh D’Amaro, spoke out and thanked everyone involved in making the Disney Wish a reality. While D’Amaro was speaking, another Cast Member was seen rushing over to the Chairman with an umbrella to hold it over D’Amaro’s head.

Fans were quick to notice this, and now many are taking to social media to say that Disney ignored Chapek and favored D’Amaro.

Another TikTok user commented on the video:

The Disney Wish will debut two new shows — Disney Seas the Adventure, featuring Captain Minnie, and Disney The Little Mermaid, a modern and innovative take on a young girl learning the power of her voice.

These two new Broadway-style shows will join the previously announced Disney’s Aladdin – A Musical Spectacular, which will reimagine and enhance the classic show we know and love.

All of these Broadway-style shows will be at The Walt Disney Theater, which is designed to look like a magical forest straight out of a storybook or fairy tale.

For more information and for details on what documentation is required, please visit the Disney Cruise Line Know Before You Go page or contact your travel agent.

Do you have an upcoming Disney Cruise Line vacation? Will you be sailing on the Disney Wish? Let us know in the comments below.