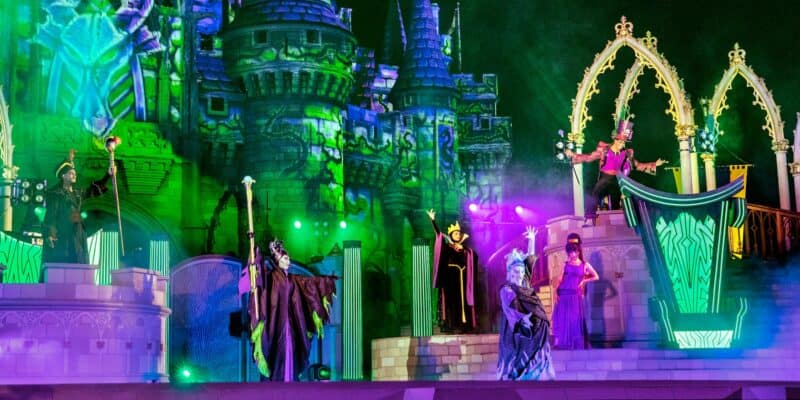 Fans have long been asking for the Walt Disney World Resort to bring the popular Disney villains to the Central Florida theme parks in a larger more permanent capacity. While this villainous news is not the fifth gate idea many Guests want, it shows that the Mouse House is listening, and from July an all-new Villain’s Lair will debut at Disney Parks — but only for selected Guests.

Aside from Disney Princesses like Belle and Cinderella, superheroes like The Incredibles, and wise-cracking foxes like Zootopia‘s Nick, many Disney fans have a soft spot for villains. There’s Cruella and Maleficent, Dr. Facilier and Captain Hook, Hades and Ursula, the list goes on. But in spite of their enduring popularity, Disney Parks worldwide seem to have a Disney Villains shortage.

Sure, Guests visiting Walt Disney World Resort can attend the hard-ticketed, Mickey’s Not-So-Scary Halloween Party (which is back in 2022 following last year’s Boo Bash in Magic Kingdom Park), and on the West Coast, Guests can spend the evening with the likes of Zombie Captain America and Agatha Harkness from the Marvel Cinematic Universe at Oogie Boogie Bash. In the coming months, Disney World Guests will hopefully be able to see Mickey once again vanquish the likes of Jafar and the Evil Queen at Disney’s Hollywood Studios Fantasmic! show.

While Disney World already attracts millions of visitors each year, fans have always speculated about the addition of a fifth gate at the Orlando Resort with a Villains-centric Disney theme park generally on top of the list. A dedicated Villains Park would contrast as much as it would complement Disney World’s already established offering of Magic Kingdom, EPCOT, Disney’s Hollywood Studios, and Disney’s Animal Kingdom, where non-seasonal villainous goings-on are few and far between.

Now, in a new announcement from Disney Vacation Club, the currently-closed Top of the World Lounge at the Disney Resort, will reopen in July with a Disney Villains makeover. The company said:

Discover the untold story of this covert hideout for some of Disney’s most dastardly villains. Even the ruthless relax.

Whether pursuing puppies or stealing souls, messing with a mermaid or belittling a beast, evil-doing is exhausting. And since a dishonest day’s work is frowned upon by mainstream masses, the deliciously devious decompress away from judging eyes––hiding deep underground… or on top of the world. Swapping stories of sabotage and toasting with tales of terror, the unsavory unwind in places inaccessible to the innocent.

Curious couture from their wicked wardrobes. Artwork befitting their ghastly galleries. And rebellious recipes for their cunning concoctions. That’s when we did what so many great Cast Members have done before us.

We gave the place a longer name. Welcome home to the Top of the World Lounge – A Villains Lair. Like the best Disney stories, it’s a place of magic… with a touch of tragic.

The Top of the World Lounge — Villain’s Lair, which reopens with new theming on July 11, 2022, finds its home atop Bay Lake Tower at Disney’s Contemporary Resort just adjacent to Magic Kingdom Park. This isn’t the first time a Villains Lounge has made its way to the theme park. Two years ago, during Disney Villains After Hours, The Diamond Horseshoe Saloon Lounge was transformed to celebrate the event.

Of the fare found inside this permanent Villains venture, DVC state:

Like the villains who lounged before you, toast to your travels and revel in rebellious recipes while swapping stories of wicked fun and plotting your next (vacation) escape. Cap off the evening with a rooftop viewing of the Disney Enchantment nighttime spectacular at Magic Kingdom park.

Only available to eligible DVC members, the Villain’s Lair Disney experience opens from 6:00 p.m. daily until midnight, with check-in on the ground floor lobby beginning at 5:45 p.m. For full terms and conditions, including reservation and blackout dates, head to the official DVC website.

The arrival of Top of the World Lounge — Villain’s Lair is just the latest in a long line of updates and additions happening at the Walt Disney World Resort. From Disney Genie and Lightning Lane being introduced on most attractions like Space Mountain and Star Wars: Rise of the Resistance to the renovation of EPCOT’s Future World and the launch of Guardians of the Galaxy: Cosmic Rewind attraction, the debut of Disney Enchantment and World Showcase’s Harmonious to the massive refurbishment of Disney water park, Disney’s Blizzard Beach Water Park, changes are afoot in Florida’s Disney Resort.

Are you a DVC member? Will you be heading up to the Villain’s Lair this summer? Let us know in the comments down below!