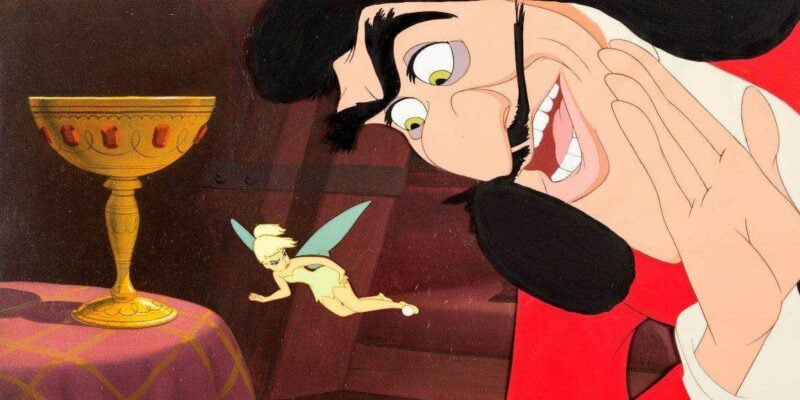 In case you weren’t aware, Peter Pan (1953) has been accused of being “outdated” and “depicting the mistreatment of people and cultures” in certain scenes, which also appear in the Disney Parks attraction, Peter Pan’s Flight.

Due to these scenes in question, Peter Pan is one of the various films that has recently been removed from children’s profiles on Disney+ for “breaching content advisories”. As for adult profiles, Peter Pan remains available but it does display a content warning before the movie plays.

Now, in a new report from The New York Times, Disney’s animated film, Peter Pan, is once again the topic of discussion as Disney has released a statement saying Captain Hook and Tinker Bell are “potentially problematic” characters.

Last year, we reported that Peter Pan’s Flight was quickly becoming a “hot topic” in regard to Disney Park attraction rethemes. Thanks to a Tweet from DLP Report, it was pointed out that Disneyland Paris recently digitally removed the one scene of the ride, which features Tiger Lily and the Indian Village, from their “Ride and Learn: Peter Pan” video. It is important to note that DLP Report states that the attraction will not see any actual changes when the Resort does reopen.

After this video emerged, fans were quick to voice their opinions surrounding the classic Disney Parks attraction.

This topic soon resurfaced earlier this year after the offensive chant from The Port Neches-Groves Independent School District.

The Port Neches-Groves Independent School District represented themselves at Magic Kingdom a few weeks ago, who, in their Native American-inspired uniforms, marched down Main Street, U.S.A. as they sang, chanted, and danced in front of Disney Guests.

However, the chant caught the attention of many as the drill team repeatedly shouted, “I-N-D-I-A-N-S, scalp ’em, Indians, scalp ’em!” while dancing.

Many shamed Disney for allowing this to happen inside a Walt Disney World theme park, leading the company to release a statement:

Now, Peter Pan is once again the topic of discussion as according a new report from The New York Times, Disney has released a statement saying Captain Hook and Tinker Bell are “potentially problematic” characters.

Per the report, when discussing Tinker Bell and Captain Hook, the Stories Matters Team said:

Tinker Bell was marked for caution because she is “body conscious” and jealous of Peter Pan’s attention, according to the executives, while Captain Hook could expose Disney to accusations of discrimination or prejudice against individuals with disabilities because he is a villain.

At least some people inside Disney are concerned that such sensitivities go too far. One of the executives worried that looking at artistic creations through a “politically correct filter” could chill creativity.

The report continued to discuss how as part of the Stories Matter initiative, Disney displays a content warning before the movie plays on Disney+:

As Disney prepared to introduce its streaming service in 2019, it began an extensive review of its film library. As part of the initiative, called Stories Matter, Disney added disclaimers to content that the company determined included “negative depictions or mistreatment of people or cultures.” Examples included episodes of “The Muppet Show” from the 1970s and the 1941 version of “Dumbo.”

“These stereotypes were wrong then and are wrong now,” the disclaimers read.

The Stories Matter team also flagged Ursula from The Little Mermaid (1989) due to her “dark skin palette”, which could be viewed through a “racial lens”. The report stated:

The Stories Matter team privately flagged other characters as potentially problematic, with the findings distributed to senior Disney leaders, according to two current Disney executives, who spoke on the condition of anonymity to discuss confidential information. Ursula, the villainous sea witch from “The Little Mermaid” (1989), was one. Her dark color palette (lavender skin, black legs) could be viewed through a racial lens, the Stories Matter team cautioned; she is also a “queer coded” character, with mannerisms inspired in part by those of a real-life drag queen.

Disney declined to comment for the New York Times article.

What do you think? Are Tinker Bell, Captain Hook, and Ursula “potentially problematic” in your eyes? Let us know in the comments below.