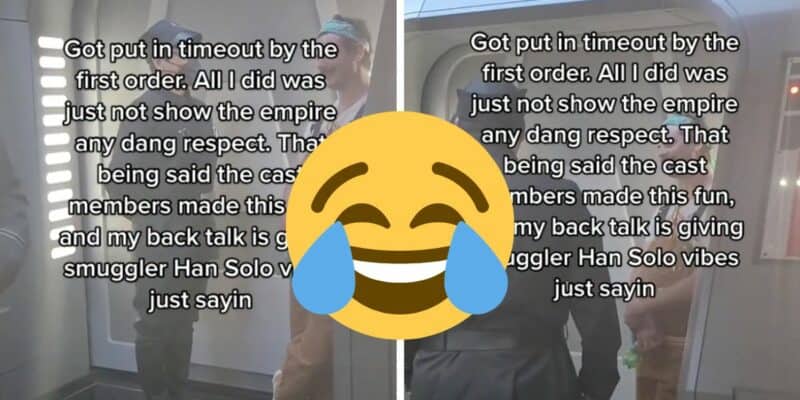 For starters, if you have never been on the Star Wars ride, the official description of Rise of the Resistance reads:

There are two versions of the ride — one located in Disneyland Park in California and one in Disney’s Hollywood Studios at Walt Disney World in Florida.

What makes this ride so unique is the Cast Members who stay in character the entire time — including those playing the role of the First Order. If you do not listen to what the First Order asks, you may get “in trouble”. This is exactly what happened to one Guest who decided to have a bit of fun and “disobey” the First Order.

TikToker gojustingo posted a video of the incident, which took place at the Disneyland Park version of the ride, along with the caption:

I don’t always talk noise to the first order but when I do I get put in timeout. #distok #disneyfyp #disneyparks #disneyland #letsgo #galaxysedge #riseoftheresistance #rebels #firstorder #castmemberappreciation

I don’t always talk noise to the first order but when I do I get put in timeout. #distok #disneyfyp #disneyparks #disneyland #letsgo #galaxysedge #riseoftheresistance #rebels #firstorder #castmemberappreciation

“Got put in timeout by the First Order,” the TikToker explained. “All I did was just not show the Empire any dang respect. That being sad the Cast Members made this fun, and my back talk is giving smuggler Han Solo vibes, just sayin’,” the user continued.

Let this be a lesson to you all — either show the First Order some respect or you, too, may be put into time-out!

Have you ever ridden Rise of the Resistance at Disneyland or Disney’s Hollywood Studios? Let us know in the comments below.