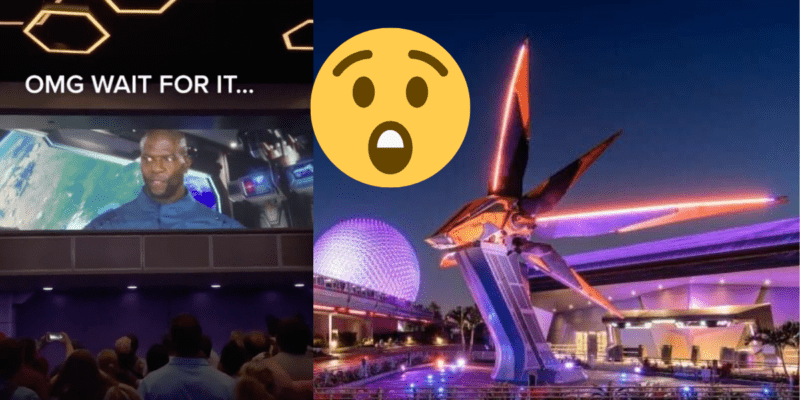 Fans love the coaster’s incredible references to the iconic Marvel Cinematic Universe film and EPCOT’s vintage attractions like Horizons and Universe of Energy.

However, one recent Walt Disney World Resort Guest felt something was missing from Cosmic Rewind and decided to add their own spin on the ride.

During a preshow scene for Guardians of the Galaxy: Cosmic Rewind, Centurion Tal Marik (Terry Crews) doesn’t realize he’s live on camera and asks if members of the crew know what he should call citizens of EPCOT. There’s a brief pause before Marik realizes Guests can see him.

A TikTok shows a large group of Guests watching the preshow as usual until one Guest shouts, “Let’s go, Brandon!” during the pause in Marik’s speech.

This is the latest in a recent slew of political incidents at the Disney Parks. In 2020, Trump supporters gathered outside the entrance to Walt Disney World with a “Make America Great Again” Mickey Mouse and were eventually sent away.

On the other side, some Guests have been frustrated when others boo at former President Donald Trump’s animatronic appearance in the Hall of Presidents attraction at Walt Disney World’s Magic Kingdom.

Guardians of the Galaxy: Cosmic Rewind is one of the largest fully enclosed rollercoasters in the world! It’s recommended for tweens, teens, and adults, with a height requirement of 42 inches. From Disney:

Do you think it’s appropriate to bring politics into the Disney Parks? Share your thoughts in the comments.