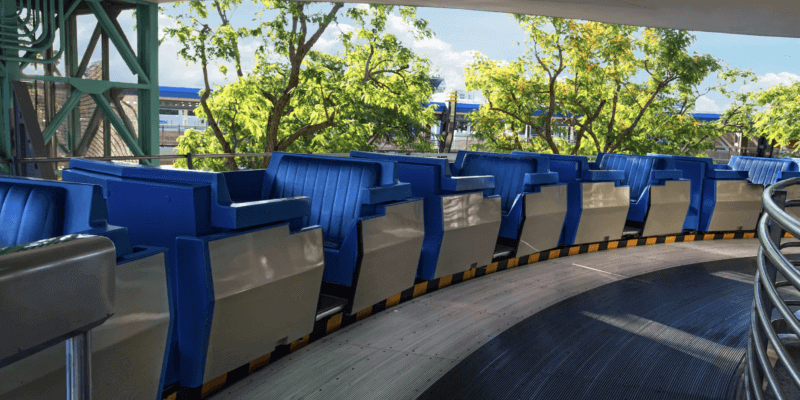 The Tomorrowland Transit Authority PeopleMover is a popular attraction at Magic Kingdom in Walt Disney World.

In case you aren’t familiar, the ride takes Guests on the grand circle tour of Tomorrowland, allowing them to see the different attractions located inside the land — including Space Mountain, Carousel of Progress, and Buzz Lightyear’s Space Ranger Spin — as well as getting the chance to people watch from the highway in the sky.

Although this attraction does not have seatbelts or lap bars, Guests are to remain seated with all arms, hands, feet, and legs inside the vehicle at all times. One time, however, a Guest decided to break the rules and jump out of the vehicle, and this is how Cast Members caught him.

In a TikTok video posted by walruscarp, you can see that in certain sections of the ride, there are pads located on the side of the vehicles. These pads are pressure pads, meaning if someone jumps out and steps onto the pressure pad, it will alert the Cast Members and the ride will stop immediately.

The Tomorrowland Transit Authority PeopleMover also has security cameras throughout the ride track so that Cast Members can make sure Guests remain seated with their hands, arms, feet, and legs inside the vehicles at all times.

Please remember that Disney Parks have rules and regulations in place to ensure the safety of both Guests and Cast Members. If you ever witness a Guest breaking the rules, or if you are ever concerned when visiting one of the Disney Parks, be sure to find the nearest Cast Member or report your issue with Guest Relations, located in each of the Disney Parks.

Did you know that Tomorrowland Transit Authority PeopleMover has pressure pads? Let us know in the comments below.