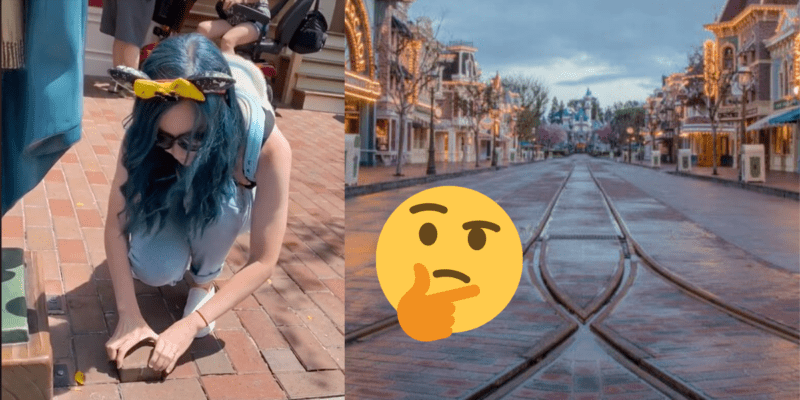 Main Street, U.S.A., is the first thing you experience when you walk into Disneyland. Walt Disney modeled it after his hometown, Marceline, Missouri, at the turn of the 20th century, adding fake businesses and residents’ names on windows to honor the people that helped make his Disneyland dream a reality.

With the bustling gift shops, the floating balloons, and Sleeping Beauty Castle ahead, it’s hard to think of a more magical way to enter the Happiest Place On Earth.

Recently, a Guest tried to make her unique mark on the iconic Park street. In a now-viral TikTok, a user who goes by Natalie Curling showed herself pulling up a loose brick from the sidewalk on Main Street, U.S.A. In the caption, Curling wrote:

Is this the new hidden brick in Disneyland? Glad to see someone got the pin I left in there! I’ll be hiding a pin at Disney world in Orlando today! Stay tuned.

Is this the new hidden brick in Disneyland? Glad to see someone got the pin I left in there! I’ll be hiding a pin at Disney world in Orlando today! Stay tuned. #disney #disneyland #wdw #mainstreet #pin #hidden #hiddenpin #fyp #fy #FrunktheBea #california #anaheim #hiddenbrick #disneyworld #arcticfox #arcticfoxhair

In her caption, Curling implies that she’s pulled up this exact brick at Disneyland Park before and left a pin there for another Guest to find. It was gone this time.

When a commenter asked why Curling pulled up the brick, she replied, “For fun! People hide little treasures underneath for the next person to pick up! 😄”

A user named Walter Bonilla remarked that now that the TikTok has gone viral, the “hidden brick” will be no more. He wrote, “well now it’s getting fixed.”

Though many commenters were confused, one Disney fan recognized this tradition and said they were happy people are still doing it. A TikTok user who goes by Emily wrote, “This is literally my favorite tradition. It’s so fun watching people still having fun at Disney, I miss it.”

Someone asked Curling if there was a spot like this at Walt Disney World and she replied, “Right now I don’t believe there is unfortunately!”

Related: Disneyland Park Has a Secret Room That Isn’t On the Park Map

In another TikTok, she heads to Walt Disney World and hides a Simba pin at EPCOT. But rather than lifting up any bricks, she puts the pin behind a tree in the Norway World Showcase pavilion:

We hid a pin today! Duet me if you find it! 🙂 @magical.memories.travel also hid a pin in Epcot today!

Have you ever found a hidden surprise at a Disney Park? Let us know in the comments!