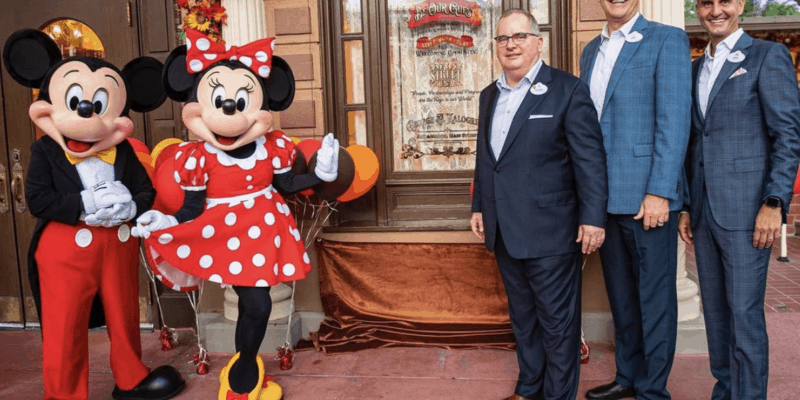 If you are someone who works for the Walt Disney Company, there are many prestigious accolades that you may be striving for.

Whether your goal is to be honored as a Disney Legend or received that coveted blue name tag, Disney ensures that their Cast Members are rewarded for the magic they create. One iconic way Disney World Resort honors some of their workers is on Main Street, U.S.A. at Magic Kingdom.

I’ve mentioned our 50-year Cast Members quite a bit here lately, and today I want to highlight one in particular. Just like me, George Kalogridis grew up in Winter Haven, Florida. He started at Walt Disney World Resort in September of 1971 as a busser at Disney’s Contemporary Resort. In the 50 years that followed, he has held a variety of leadership roles with Disney Parks, Experiences and Products, including presidencies at Disneyland Resort and Walt Disney World Resort. Fast forwarding to the present, he was just honored with a window on Main Street, U.S.A. in recognition of his remarkable contributions to The Most Magical Place on Earth. Congratulations, George, and thank you for your part in making magic.

Fantastic start to the morning as we dedicated a window on Main Street to George Kalogridis. Be sure to check it out at the Chamber of Commerce. After that, we celebrated his 50th Service Anniversary with his friends and family. Congratulations George!

George started his journey with the company in 1971 as a busser at Disney’s Contemporary Resort and has since continued to progress in his career. After 50 years of service, we are happy to see George commemorated at Magic Kingdom for life!

Who is your favorite Disney Parks icon on Main Street, U.S.A.? Let us know your thoughts in the comments below.