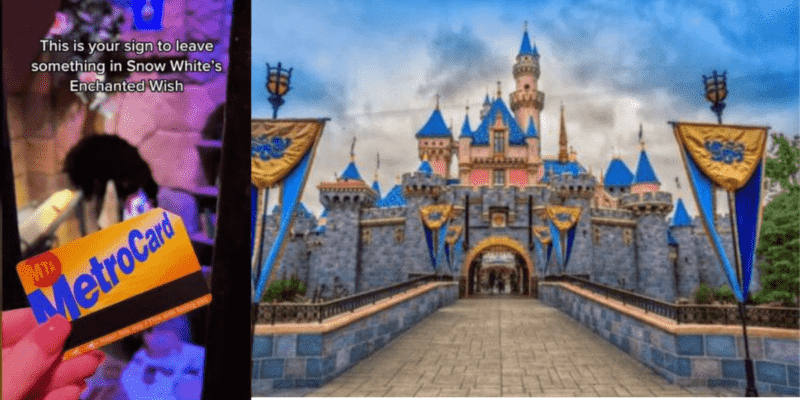 Disneyland is a magical place, but like any theme Park, it deals with its fair share of Guest issues.

Related: Guests Shocked by Piles of Trash in Disney, “I Have Never Seen It So Bad”

With the popularity of social media and a smartphone camera in everyone’s pocket, Guests are quick to share problems on their vacations on the Internet. Disney fans are also known for creating social media trends that leak into the Parks, like a recent trend that encouraged Guests to break the Disney Parks’ dress code to get a free shirt.

This week, a Disneyland Guest who goes by Majé Harrison on TikTok encouraged other Guests to throw litter into a historic Disneyland dark ride: Snow White’s Enchanted Wish.

Harrison posted a video captioned, “Now Disneyland has a little piece of NYC (until they clean it out lol).” In the now-deleted video, she throws a New York City Metro Card onto a fountain set-piece while onboard Snow White’s Enchanted Wish.

Harrison deleted the video following an onslaught of Disney fans and Cast Members’ comments telling her not to leave her trash on the ride. Harrison described the card as “meaningful” to her in a reply. She claimed that she has friends who are Cast Members that she loves, and she wouldn’t do anything to make their lives harder.

Disney Park fans still argued that she shouldn’t have left anything on the ride, that it’s just going to be removed and cause problems for the custodial and attractions Cast Members that work on Snow White’s Enchanted Wish.

Though she was initially defensive, Harrison eventually deleted the video and has not commented further.

Snow White’s Enchanted Wish was renamed from Snow White’s Scary Adventure in 2020 and reopened in 2021 after the ride was updated with new animatronics and LED screen technology to celebrate the film’s 83rd anniversary. The classic dark ride opened with Disneyland on July 17, 1955, as Snow White and her Adventures and has remained a beloved part of Disneyland Park.