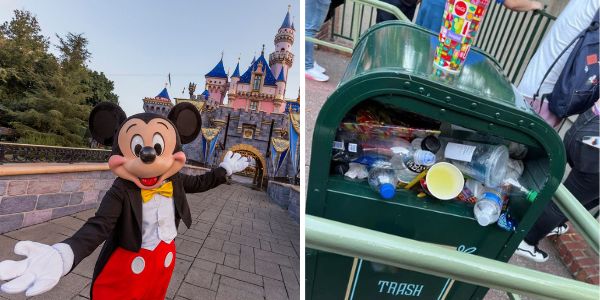 Unfortunately, in recent times Disney Guests have noticed and felt that certain aspects of the Disney Parks experience have changed.

For instance, some Guests have found that merchandise quality has seemingly declined, while others are frustrated about the smaller portion sizes that are being served at select locations Resort wide.

Still, other Guests have pointed out that Disney World’s four theme parks — Magic Kingdom, Disney’s Hollywood Studios, EPCOT, and Disney’s Animal Kingdom — are not as clean and trash-free as they once were, as we reported earlier.

Now, Guests have noticed this same issue at the Disneyland Resort, as shown in the Reddit post below from u/Mrsandman1118:

Never have seen it this bad.

Never have seen it this bad. from Disneyland

As you can in the post, trash was severely piled up at a trash can with some other debris left in some of the landscaping areas. This is an unfortunate consequence of the larger crowds coming into the Parks, but it is still no excuse to leave trash like this. Several users shared their thoughts and opinions on this situation in the comment section.

One user said, “I’ve seen line trash cans get like this over the years. Tougher for sweepers to hit because they have to cut through the line, I suppose. Not an excuse, just an observation”. Another user agreed, saying they also had “never seen trash like this in the parks.”

Of course, on a property the size of Disneyland, Cast Members cannot be expected to pick up every piece of garbage, which is why trash cans are plentiful. What was shown in the post above indicates that some Guests need to be more respectful and hang onto their waste until they reach the next trash can in the line. Some users even suggested this, claiming that Disney is understaffed and we should not blame the Cast Members.

At Disneyland, there is so much for Guests to enjoy! Now that the mask mandate has dropped for fully vaccinated Guests, Guests can enter buildings without a face covering if they so choose. Walking up to Sleeping Beauty Castle is always a dream, especially when you get to go inside and relive the story of Aurora and Maleficent. Riding classics like “it’s a small world,” Pirates of the Caribbean, Mr. Toad’s Wild Ride, The Haunted Mansion, Matterhorn Bobsleds, Splash Mountain, and more will have you feeling the magic and craving a churro! Toontown is currently gearing up for a massive change which will be revealed in 2023 with the reopening of the land and the debut of Mickey and Minnie’s Runaway Railway. Plus, now at Disneyland, Guests can enjoy Star Wars: Galaxy’s Edge for some blue milk or green milk and ride Rise of the Resistance and Smuggler’s Run. Now, Guests can also enjoy Disneyland Forever and the Main Street Electrical Parade!

Have you ever seen trash piled up like this?