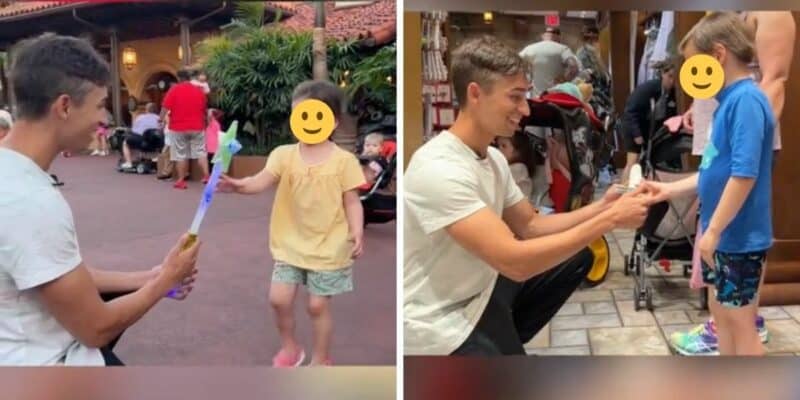 Part of what makes the Disney Parks so different from other theme parks around the world is the magic that is offered throughout the theme parks. Typically, magical moments are created by Disney Cast Members, but sometimes the Guests go above and beyond for others Guests as well.

TikToker and YouTuber, JoJo’s World, decided to make some magic for families visiting Walt Disney World recently as he purchased some Disney merchandise and then went around and handed out free toys to children throughout the Park.

In one video, JoJo can be seen finding a family inside one of the shops at Magic Kingdom where he gave away a sword. At first, the child said he wanted a lightsaber instead of a sword, but after a bit of convincing, and after JoJo got down onto the kid’s level, the child took the sword and the two began to play.

In another video, JoJo flagged down a family with a little girl in Adventureland. He asked the child if she wanted the Tinker Bell wand that he just bought, to which she was clearly excited. In the video, you can see she is fascinated the lights from the wand.

JoJo then proceeded to tell her to make sure she helps Tinker Bell fly during the fireworks show. You can watch the cute interaction below.

Reply to @ouija.boy I have so much fun doing this 🤩 #jojosworld #disneyworld #wdw #fyp #tinkerbell

Related: Despite Getting Screamed at By Guest, Disney CM Creates Magical Moment

JoJo posted an entire video to YouTube, showing him going around Magic Kingdom handing out free merchandise to various families.

Have you ever made a magical moment for Disney World Guests? Let us know in the comments below.