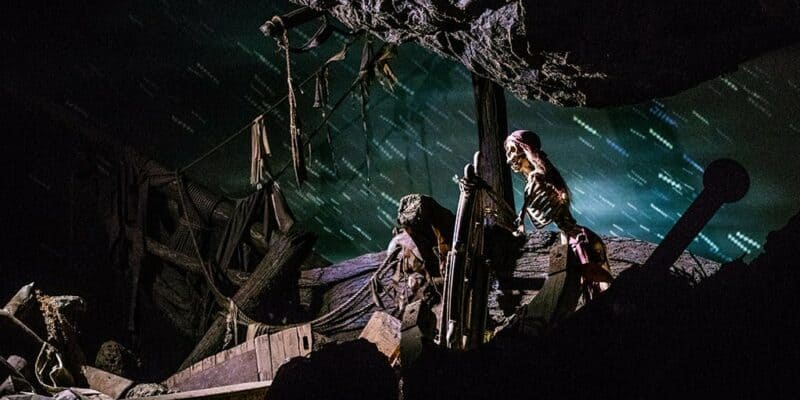 California couple Scott and Terry Rummell are set to auction off a large portion of their 45,000 piece “Disneyana” collection this weekend, Saturday, May 21, 2022 and Sunday, May 22, 2022.

Previously, Beyond the Backlot did a special feature on Scott and Terry’s home, which you can watch above. The couple sold their well-known Yorba Linda, California home and moved to a beach house in Dana Point. Southern California news outlet, The Orange County Register, noted that if the Yorba Linda residence was a “Disney museum,” Dana Point is a “Disney Resort”:

The nautically-themed Dana Point beach house — which draws design inspirations from Disney’s Beach and Yacht Club resorts at Walt Disney World — doesn’t have anywhere near as much Disney memorabilia as the Yorba Linda house.

“You wouldn’t walk in and say, ‘Oh, this is a Disney museum,’” Rummell said. “But there are Disney nautical pieces all over.”

The outlet shared details regarding the upcoming 1,500-piece auction, which is expected to earn millions of dollars for charity with memorabilia from Disneyland Resort, Walt Disney World Resort, and Disney movies:

Rummell’s career as a Hollywood voice-over artist for movie trailers like “Rocketman,” “Interstellar,” “It,” “Dunkirk” and “Shape of Water” as well as a host of Marvel, Disney and Star Wars films helped finance the world’s largest Disneyana collection — which will be sold at auction over the next five years.

Key Disneyland pieces up for auction this weekend include Autopia and Mr. Toad cars, a Skyway gondola and a Rocket Jets ride vehicle as well as Club 33, Enchanted Tiki Room and Pirates of the Caribbean signs along with attraction posters and props.

Furthermore, Rummell stated, “I don’t know that I’ve ever felt this cacophony of emotions before. I’m excited about the idea that all these pieces, which each have a story, will live on and make somebody else happy. I’m sad in some ways because that part of our life is over.”

Another article about the upcoming auction shared specific details about some of the most impressive Disney Parks items that will be for sale, including the aforementioned Skyway gondola which could sell for as much as $621,000.

Given Disney fans’ current interest in all things Pirates of the Caribbean — thanks in large part to the ongoing Johnny Depp vs. Amber Heard trial in Virginia — perhaps the most exciting item is a skeleton helmsman figure, described as:

The circa 2010 replica recreates the Disneyland attraction scene with a skeleton used during the making of a ‘Pirates of the Caribbean” film and a ship’s wheel made by a Hollywood prop creator.

The Disneyland attraction’s skeletal helmsman inspired the first movie poster for the “Pirates of the Caribbean: Curse of the Black Pearl” film.

Fans can also bid on a Disneyland-used wait time sign from the original Pirates of the Caribbean ride. It is described as:

The rare 1967 hand-painted, park-used sign was created to inform Disneyland visitors of the wait time for the Pirates of the Caribbean attraction.

The 15-inch-square custom wooden sign is attached to a 4-foot, 7-inch-tall stand.

Another featured piece of memorabilia is a Park-used silk-screened Pirates ride poster that hung in Disneyland Park’s New Orleans Square area from 1967 until the late 1980s. It is described as:

The original silk-screened park attraction poster was used in Disneyland from 1967 when the ride opened until the 1980s.

The framed 41-by 59-inch poster was designed by Disney Legend Collin Campbell.

Rummell’s voice over teaser video can be viewed below and additional information about his career at Disney and beyond can be found on his official website: