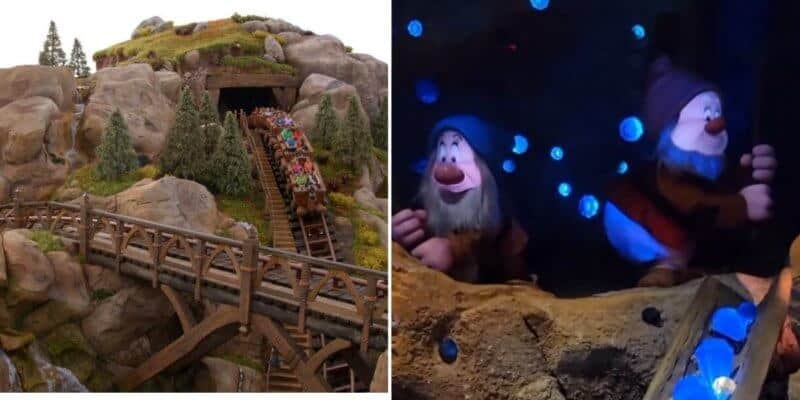 Attractions at Walt Disney World run every day for hours on end, so it comes as no surprise that attractions in Disney theme parks can break down from time to time. From Spaceship Earth located in EPCOT to Mickey and Minnie’s Runaway Railway in Disney’s Hollywood Studios, we have shown some very interesting instances of when things don’t exactly go as we expect in a Disney Park.

But that doesn’t mean it doesn’t make for a magical experience! Many Disney fans enjoy seeing what’s behind the scenes when the lights turn on, and some have never experienced a ride breakdown and wish for it to happen so they can cross it off their bucket list. At Magic Kingdom at Walt Disney World, one Disney Guest showed his fans on TikTok what it was like during an attraction breakdown on the Seven Dwarfs Mine Train.

As we can see in the TikTok video, while entering the mine, where Guests encounter all the Seven Dwarfs working away, collecting brilliant diamonds and glowing gems, the attraction comes to a complete stop. Harvster from TikTok mentioned in the comments that Guests were stuck for only 20 minutes and while waiting, he saw something pretty tragic happened to poor Sneezy.

Check out the video below as @inonicism on TikTok states:

#sevendwarvesdown #DisneyWorld Thankfully, no one was harmed except for sneezy ?. RIP

#sevendwarvesdown #DisneyWorld Thankfully, no one was harmed except for sneezy ?. RIP

A Cast Member responded in the comments of the vidoe, stating that Sneezy’s face tends to always disappear when the attraction temporarily breaks down.

During these ride breakdowns, sometimes Guests are asked to evacuate and others are asked to stay seated until the issue has been resolved. Either way, it is good to note that while this may happen during your Walt Disney World vacation, you can make light of the situation and find some humor in it. Plus it can make for a cool story to bring home to your family and friends.

Just remember that in instances like this one, you should always follow the rules and regulations that are in place for your safety. Cast Members in Disney World are trained and it is their job to ensure every Guest is safe. If you experience an attraction breakdown, remain in your seat with your arms and legs inside the ride vehicle at all times until you are given other instructions.

For those who have not experienced this family fun and swaying rollercoaster ride, the official Walt Disney World description reads:

In my opinion, the Seven Dwarfs Mine Train has one of the best and most interactive queues in all of Magic Kingdom! Children and adults will enjoy jewel sorting and projection barrel games, listening to water spigots play familiar music you may remember from the classic Disney film Snow White and the Seven Dwarfs, and even spot a note that Doc leaves for his Guests.

Have you been to a Disney attraction, and you had to be evacuated? What’s the craziest thing you’ve seen while experiencing a ride? Let us know in the comments below!

Academy Travel are EarMarked Diamond and can help you plan your next Walt Disney World adventure! Click the link for a free quote today!