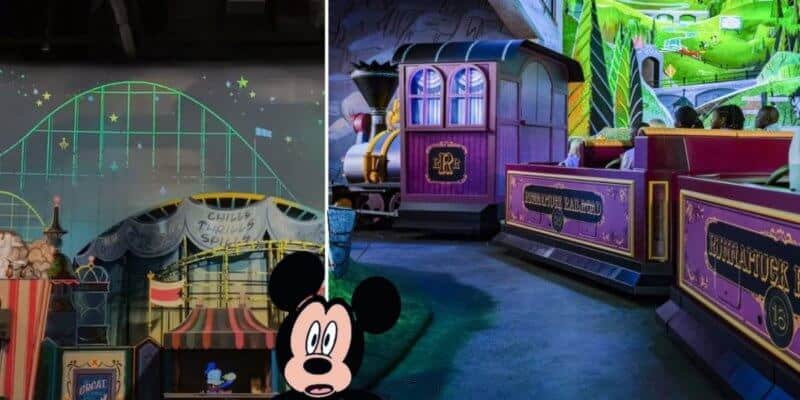 Disney’s attraction evacuations can either be a Disney fan’s dream come true, or a complete nightmare. Many Disney fans cannot wait to see what goes on behind-the-scenes when a Disney attraction comes to a complete stop. Others who have been waiting their entire life to visit a Disney Park just want to experience every ride without having to be kicked off.

One of my personal favorite things about getting evacuated is hearing Disney characters remind Guests to remain calm. It’s always fun to hear Sebastian tell everyone to hold on to their shells while being stopped during Under the Sea — Journey of The Little Mermaid, for example.

We recently came across a Disney Guest who was caught off guard while riding Mickey and Minnie’s Runaway Railway in Disney’s Hollywood Studios and made “light” of an unexpected situation.

While Disney Imagineers have proven time and time again that Disney attractions have evolved over time and have gotten better, for example, Avatar Flight of Passage in Disney’s Animal Kingdom, Disney attractions are bound to break down every once in a while, as machines cannot work 100% of the time. Luckily, Disney fans can be reassured that Disney puts the safety of their Guests first.

While enjoying the adventures of Mickey and Minnie’s Runaway Railway in Walt Disney World, TikTok user @Disneymommagic was stopped unexpectedly, as bright lights exposed the entire carnival scene. As Mickey and Minnie’s voices came on the speakers expressing concern, a Cast Member notified the crew that the reasoning for this interruption was due to a power shortage as he states “power down”.

The TikTok user posted a video to the platform, even sharing that she wasn’t able to finish the ride:

Although this may take the magic out of the ride for some Disney fans, we noticed how many are excited to see what a Disney attraction actually looks like when the lights are on.

One Disney Guest shared her crazy experience not too long ago about getting to see the entire attraction Splash Mountain from overhead and underneath while being evacuated, exposing what it’s like to get “lost” inside a Disney attraction.

I think many of us can agree that Disney Parks, such as Disneyland Resort in California and Walt Disney World in Florida, give us the best experience we possibly can imagine and always try to make up for minor letdowns such as attraction evacuations.

If we look at the positive side, it’s a great story to tell your friends and a memory you will remember for a lifetime.

Do you have a crazy evacuation story to tell? Let us know in the comments below!

Planning your next Disney adventure? Our friends at Academy Travel can help and are EarMarked Diamond!