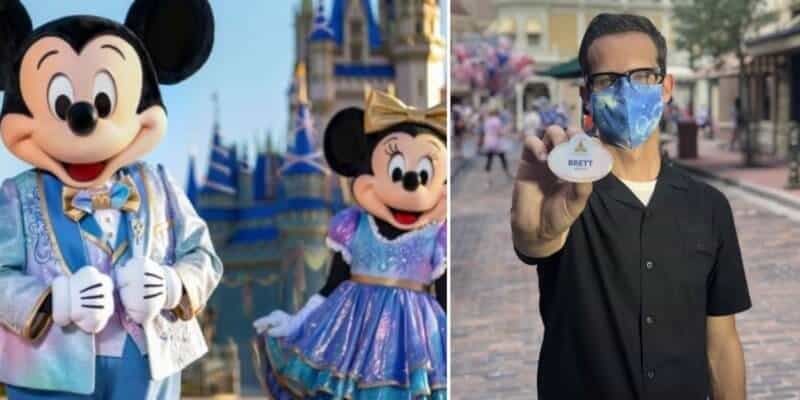 It is wonderful to think that Walt Disney’s dreams of building Walt Disney World so many decades ago will be celebrating 50 years starting on October 1, 2021. And, what better way to celebrate it than creating a special token and reminder for the Cast Members?

As we all know, Disney Cast Members embody the magic and wonder of Walt Disney World. When visiting a Disney Park, Cast Members take pride in giving Guests the most inviting and magical experience they will always remember.

As we come closer to the 50th anniversary of Walt Disney World this year, it was only fitting that the Cast Members receive a special upgrade to their uniform, and one many Disney Guests will recognize right away, the Cast Member name tag!

Look how it sparkles!

One of Disney’s trademarks is how professional Cast Members look, with uniforms that match the theming of the land or attraction where they work. The name tag is one of the most iconic pieces of the “Disney Look” and gives Guests a personal connection to each and every Cast Member.

Disney knows just how important Cast Members are in making the 50th one of the most magical times Disney World has ever offered to Guests, so they decided to surprise them with a new name tag style! Cast Members’ names are now enlarged for Guests to spot right away, as Disney Parks Blog shared:

Brett Owens, a graphic designer with Disney Live Entertainment, took pride in being part of the team creating the new look. “Designing this nametag meant a lot because it allowed me to think of every single person who will be receiving one for the 50th anniversary celebration. Our team really wanted to create a special way to say, ‘Thank you!’ to the cast, as well as give them something to have as a reminder they were here for this special time in our history.”

Watch as Disney World Cast Members get a first look and get super emotional at this gorgeous new nametag complete with a shimmering Cinderella Castle and gold trim.

President of Walt Disney World Resort, Jeff Vahle, shared his preview of this new pin on Instagram and was overwhelmed with memories of his first time receiving this special addition to his work attire as he stated:

One of the most memorable moments in my career was when I received my first nametag and officially became a Cast Member. It’s a huge part of our culture and heritage shared by all Cast at Disney. As we prepare to celebrate our 50th anniversary this October, I am thrilled to preview new nametags in development, designed to bring some additional shimmer to our Cast Members providing countless memories for Guests. The new EARidescent design will premiere later this fall; I can’t wait to see the team receive them as we start The World’s Most Magical Celebration together. ✨

We’re so unbelievably excited for The World’s Most Magical Celebration, beginning Oct. 1. To honor our Cast Members, who make so much magic for our guests each and every day, we are thrilled to share the design of a new nametag that they will debut for the celebration featuring an “EARidescent” design that highlights the resort’s 50th anniversary castle logo alongside shimmering gold accents and a touch of pixie dust! #DisneyWorld50 #DisneyCastLife

We are so thrilled to see how Disney makes magic happen not only for their Guests, but for the Cast Members! We all can agree that they are the heart of what makes Walt Disney World what it is today and it is only fitting that they receive a 50th makeover too!

What do you think of this new Disney nametag? Let us know in the comments below!

Need advice planning your next Walt Disney World vacation? Our friends at Academy Travel are Earmarked Diamond and can help!