Meeko Spotted Digging Through Garbage Can During Cavalcade - Inside the Magic 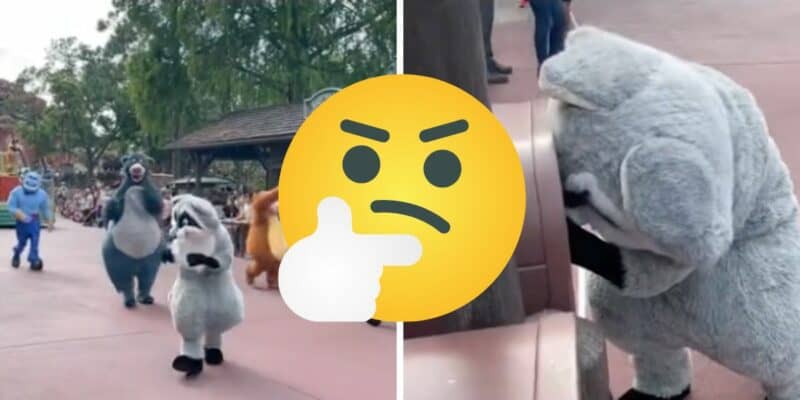 The new Disney Adventure Character Cavalcade debuted earlier this year at Magic Kingdom. The cavalcade is different from other cavalcades as this one includes the most characters ever! Guests can spot characters such as Nick and Judy from Zootopia, Baloo and King Louie from The Jungle Book, José Carioca and Panchito from The Three Caballeros, Miguel from Coco, and more.

Rare characters can also be spotted including Genie from Aladdin, Timon from The Lion King, and Meeko from Pocahontas!

In a recent performance of the Disney Adventure Character Cavalcade, Meeko broke from the parade route and decided to dig through the trash can nearby (I guess someone didn’t have lunch!)

Disney World Guest and TikTok user dvc_park_hoppers shared a video of the recent cavalcade performance, where you can see Meeko run over to the nearby trash can and begin digging through the garbage.

Disney fans and Guests loved seeing this as it will now be a magical memory for most. Seeing Disney characters bring out their unique personalities to the stage is always special and gives us a laugh. You can see the video below.

MEEKO must have skipped lunch today!

Since we reopened our parks last year, we’ve been presenting favorite Disney characters in new ways, such as the cavalcades that travel the parade route at Magic Kingdom Park. These cavalcades have been very popular and will continue to be part of the park entertainment experience into the future. Mickey’s Celebration Cavalcade debuted Oct. 1 as part of the 50th anniversary, and later this winter, we’ll introduce a new cavalcade, the Disney Adventure Friends Cavalcade, with an exciting lineup of characters all embarking on a great journey through the park. The Disney Adventure Friends Cavalcade will feature the most characters of any cavalcade to date, including Nick and Judy from “Zootopia,” Baloo and King Louie from “The Jungle Book,” José Carioca and Panchito from “The Three Caballeros,” Miguel from “Coco,” plus Merida, Moana, The Incredibles, and so many more!

Sing and Dance with Friends

Plus, so many more!!

Don’t miss this chance to see some of your Disney favorites in action! This cavalcade will be appearing multiple times throughout the day at Magic Kingdom Park. Check your My Disney Experience app for showtimes.

Have you seen the new Disney Adventure Character Cavalcade at Magic Kingdom? Let us know in the comments below.

Comments Off on Meeko Spotted Digging Through Garbage Can During Cavalcade