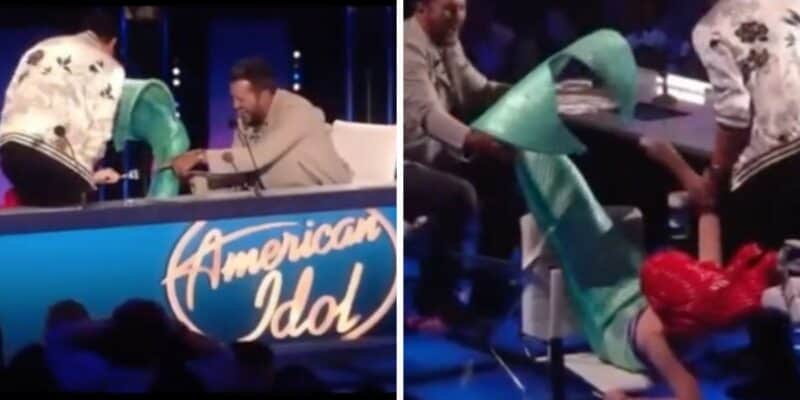 Disney magic took over American Idol last night as contestants performed various fan-favorite Disney songs. The judges even channeled their Disney side as Katy Perry dressed up as Ariel from The Little Mermaid.

Prior to Disney Night, the top 10 contestants visited Disneyland Resort to get inspiration from the Parks for their performances. They all got to experience everything the Parks had to offer, including the Main Street Electrical Parade and other nighttime spectaculars. The judges, Luke Bryan, Katy Perry and Lionel Richie, joined the top 10 contestants and even paid a visit to some Disney characters, including Mickey Mouse, Minnie Mouse and Goofy.

Disney Night aired on ABC last night, Sunday, May 1 where contestants sang songs including “Circle of Life” from The Lion King and “Carried Me With You” Onward.

During Disney Night, one of the judges, Katy Perry, took a fall as her chair tipped over backwards, leaving her fin sticking up in the air behind the judges table.

American Idol host Ryan Seacrest was in the middle of speaking when he saw Katy Perry take the fall, leaving him shocked. The camera then panned to the judges table where all you saw was Lionel Richie and Luke Bryan leaving behind the table, with a mermaid fin sticking up in the middle.

Katy Perry seemed to be okay as Bryan and Richie helped her back up she was seen laughing. Seacrest rushed over to the judges table as well asking Katy Perry if she was alright, to which she then nodded and Seacrest announced “she’s alright”.

TikTok account, katyperrydaily, shared a video of the fall to the social media platform, which you can see below.

If you missed Disney Night, here was a complete list of songs the top 10 contestants sang:

Did you tune into American Idol‘s Disney Night last night? Which performance was your favorite? Let us know in the comments below.