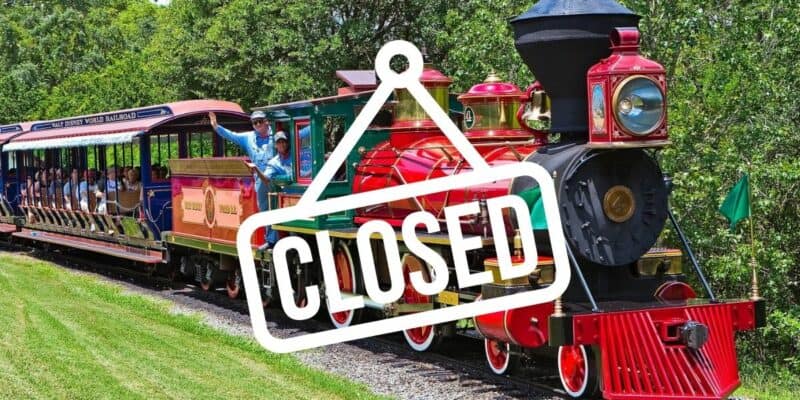 Are you headed to Florida to visit the Walt Disney World Resort in June? When you’re planning a vacation to a theme park, it’s essential to know of any ride closures in case your favorite attraction is undergoing refurbishment during your trip.

If your vacation is between June 1-30, you’re in luck. Only one Walt Disney World attraction will be closed next month!

The Walt Disney World Railroad has been closed since December 2018, with no opening date in sight. Walt’s iconic steam train closed for the construction of TRON Lightcycle Run in Tomorrowland at Magic Kingdom, which is still under construction.

Railroad tracks were added to the site last week, hinting at a return of the beloved Walt Disney World Railroad.

Unfortunately, the reopening seems to be a while off, and the railroad won’t operate at Magic Kingdom next month, according to the current Disney Parks calendar.

The Walt Disney World Railroad is a Disney Park icon. It’s a unique attraction that serves as both a ride and a mode of transportation throughout the Park, with stops in Fantasyland, Frontierland, and Main Street, U.S.A.

If you haven’t had the chance to step aboard the railroad, here’s the official description from Disney:

TRON Lightcycle Run is a partially enclosed motorcycle rollercoaster attraction and will be the most recent update to Tomorrowland in Magic Kingdom at Walt Disney World. Though an opening date hasn’t been announced, Disney Parks fans have been closely following the construction of the coaster, inspired by TRON Lightcycle Power Run at Shanghai Disney Resort. From Disney:

Sync the pedal to moto-metal while twisting, turning and riding for your life in the cyber-fi world of TRON!

Launcher-Upload Conduit
Anticipation heightens as the Lightcycles lunge forward with sound effects building to a feverish pitch. Suddenly, you’re throttling through a tunnel of flashing markers and, just as quickly, plummeting onto a turbo-charged track known as the Grid!

The Grid
Filled with brilliantly illuminated shapes and sleek, color-changing TRON iconography, this game-world “gravity box” seems to rev harder with enhanced energy as Lightcycles catapult past each Gate. Will Team Blue capture them all and take the championship? See if you can defeat the Programs, survive the Power Run and make your way back to the real world!

From Film to Attraction

Groundbreaking computer animation and brilliant visual effects created a legacy that delights fans to this day.

In 1982, Disney made filmmaking history with TRON, the first production of its kind to mix live-action with computer-generated visuals and backlit animation. Loved by legions around the world, it went on to inspire video games, comic books, an animated series and the 2010 big-screen sequel, TRON: Legacy.

Today, Shanghai Disneyland honors the franchise with one of the coolest and fastest indoor roller coasters in any Disney theme park—TRON Lightcycle Power Run.

Inside the Magic will report on any announcements about the reopening of the Walt Disney World Railroad and the construction of TRON Lightcycle Run at Magic Kingdom.

When’s the last time you rode the Walt Disney World Railroad? Are you looking forward to its return? Let us know in the comments.