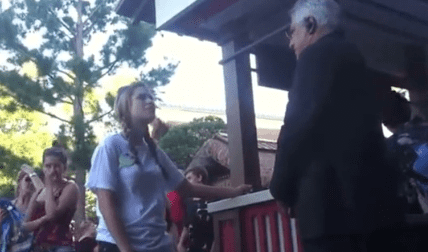 Within the property, Guests can experience unique rides and attractions, magical offerings, delicious food items and more. When families visit Walt Disney World they expect above and beyond customer service and days filled with magic.

One time, a Guest caught an incident on video involving a Cast Member and Guest arguing. The Guest can be heard saying things such as “You were accepting other parties ahead of us” and “That is extremely unprofessional”.

She was later heard saying “Probably because you are a sh*tty establishment” and “You were also putting your fingers in my face that is sexual harassment.”

The Cast Member remained cool, calm, and collected throughout the entire incident.

Related: Guest Fights With Cast Member Over Stroller in Disney

You can watch the incident unfold in the video below or by clicking here.

We do want to note that after further evaluation we found out this incident did take place a few years ago, but was reposted to spark a conversation surrounding how Bob the Cast Member handled the situation. TikToker Ivan G. said:

People like that the should be ejected from the parks.

OMG….the entitlement of some guests drives me INSANE!!!! 😡😡😡😡

BOB, You did a great job, this is why I am not in customer service anymore

In this situation it seems as though there were no reservations available for the restaurant, which is something beyond the Cast Member’s control. We understand that Walt Disney World is a magical place and offers above and beyond customer service, but some things are out of the Cast Member’s hands. When visiting the Parks, please be patient and respectful to others.